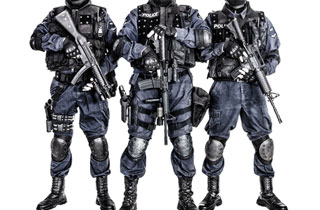 So far, no one knows the name of Michael Brown‘s shooter, nor do they know why the Ferguson Police Department hasn’t released the name of the officer responsible. But Yahoo! editor Garance Franke-Ruta tipped the world off to this article from the Columbia Journalism Review, published back in June, which revealed the existence of a bill that would allow the police to redact the names of officers who shot civilians.

As the CJR summarized it:

In other words: If this bill became law, and I were an off-duty police officer in Missouri and I shot someone in the course of a confrontation, and I was not charged for it, then the Post-Dispatch basically would be high and dry in accessing records about the incident. Related records containing my name would be closed or redacted, and no agency could disclose my name. That means I’d be able as a police officer, privileged by the state to use lethal force, to discharge my firearm in public—to shoot someone—without leaving public fingerprints.

Rooda also happens to be the business manager of the St. Louis Police Officer Associaton, and defended his bill to the press in the light of Brown’s death.

“These guys face threats during their eight-hour shifts. They shouldn’t have to face them at home,” he told St. Louis Today. “If they did something wrong, they’re going to be charged criminally and everyone should know what their name is.”

Currently, the bill hasn’t gone anywhere after its introduction to the House back in January.