Pundits Are Turning Bill Clinton into the New LBJ
LEADING

Pundits Are Turning Bill Clinton into the New LBJ 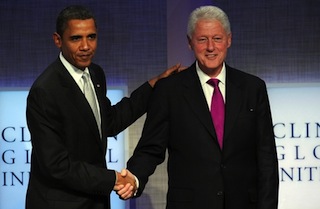 The Green Lantern Theory of Presidential Powers received another blow last week when Norm Ornstein eviscerated the myth of former President Lyndon Baines Johnson as congressional ballbuster who Got Stuff Done. (Bryan Cranston’s portrayal of LBJ in All the Way is a good puncturing of it, too.) Tl;dr version: LBJ rammed a lot of legislation through a Democratically-controlled Congress and profited from goodwill following John F. Kennedy’s assassination; once that goodwill wore off and LBJ lost his majorities, he was about as effective as any other president.

Why is this a matter of such urgency? Because LBJ has served as the primary precedent for that chunk of the pundit class that feels — and it is very much a feeling — that President Barack Obama would be able to pass legislation like a Grand Bargain if only he would Lead, leading here being defined as Getting Stuff Done, an argument that begs its premise. (Leading = getting stuff done; getting stuff done = leading.) It also ignores the more obvious historical parallels at play: Obama passed the largest domestic policy initiative since, wait for it, LBJ, along with a second stimulus package and banking reform, but did it all when he had a friendly Congress. After the 2010 election, his legislative achievements narrowed just as Johnson’s did. Leading like a Leader had zip to do with it.

So if Johnson is in fact a poor precedent for the idea that Obama could magically Lead his way to unprecedented late-term accomplishments, who’s his replacement? Increasingly, that’s Bill Clinton. Through the soft lens of nostalgia for the 90s economy, Clinton has been elevated in the Narrative to an emollient figure who gladhanded with Congress to get things done. (That said Congress was trying to impeach him for much of that time is oddly not relevant.)

“This isn’t about cycles or not being in engaged. This is about leading and managing this process. This is a really dangerous world. The point essentially that Clinton was making eloquently in his own defense, something he’s brilliant at, is to say he made deals. And he made deals. Obama does not like to make deals. And you could sit on all of the economic issues, you could make a deal between the Republicans and Obama on the spending and the taxing issues. It’s not really that hard. Obama doesn’t want to do it.” [E.A.]

Ignoring for today that Obama has multiple times proposed the sort of deals Woodward claims he should, only to be rebuffed by the conservative House, Woodward’s praise of Clinton’s “eloquence” is telling. There’s an elemental difference between LBJ and Clinton as templates for Obama’s weakness: whereas LBJ was prized for Getting Stuff Done, Clinton is often considered the Salesman in Chief. LBJ was the master of the backroom deal; Clinton the master of the public pitch. LBJ is invoked to make Obama seem to lack the substance of leadership; Clinton to make him seem to lack the projection of it. Leading = looking like a leader; looking like a leader = leading.

This is the same essential point made in Maureen Dowd’s bizarrely cynical column yesterday:

You should take a lesson from Adam Silver, a nerdy technocrat who, in his first big encounter with a crazed tyrant, managed to make the job of N.B.A. commissioner seem much more powerful than that of president of the United States.

Silver took the gutsy move of banning cretinous Los Angeles Clippers owner Donald Sterling for life, after many people speculated that there was little the N.B.A. chief could do except cave. But Silver realized that even if Sterling tries to fight him in court (and wins) he will look good because he stood up for what was right.

Read that again. Dowd really is arguing that Obama would profit more from the bold but simplistic appearance of doing good than its complicated actuality. Call this faux-Green Lanternism: the president doesn’t need to really use the heroic powers he doesn’t have, he just needs to pose like it, and legislation will magically clear the GOP-controlled House.

Bollocks. As history smoothed out the tumult of LBJ’s term-and-a-half (Kevin Drum nails the ambivalence of his legacy well) and reduced him to the Taskmaster, it is also effacing the horrific partisanship of the mid-to-late 90s — much to Republicans’ benefit. The features we so prize in past leaders often glow more brightly in retrospect, and the directness of history is, at least in part, an illusion; to compare historical refractions to present actualities is to misunderstand both.

Bob Woodward doesn’t think Clinton’s accomplishments were that hard; how long will it be until a Woodward-like figure says the same thing about Obama’s?

Watch Woodward below, via MSNBC: