Qaddafi/Gadhafi/Gaddafi/Qadhafi Brings His Stand Up Show To The UN: The View From Twitter

Qaddafi/Gadhafi/Gaddafi/Qadhafi Brings His Stand Up Show To The UN: The View From Twitter 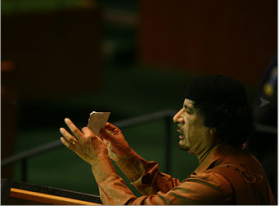 Did you miss Muammar el-Qaddafi’s (or Gadhafi/Gaddafi/Qadhafi depending on who your media source is) address to the United Nation’s General Assembly this morning? It was a doozy. And at 90 minutes long (the time limit is 15, by the way) perhaps best viewed from Twitter, which courtesy of ABC’s Jake Tapper, CBS’s Mark Knoller, Salon’s Mike Madden, Anna Marie Cox, and Politico’s Ben Smith and Michael Calderone among others, was distilled it down to its very best parts…with one or two embellishments. It made for the best twitter read I’ve had since Sarah Palin announced her resignation. Behold. Who knew a former “terrorist” (President Reagan’s words, not mine) from Libya could bring out the media funny so well. (Note: Tweets in reverse chronological order.)

“Fox hasn’t dedicated this much airtime to a raving lunatic since that Glenn Beck special.”

Mark Knoller: If Qadhafi ever gives up the de facto leadership of Libya, could you see a talk show in his future?

Andy Levy: Qaddafi: We are all pirates. Except for the pirates. America? Pirates. Israel? Pirates. Pirates? Not pirates. [EXACT TRANSLATION]

Ben Smith: RT @mkoshark: Gadhafi is set to close his #UN speech with a shameless plug to watch his stint on next season’s Dancing With the Stars

Chris Lehmann: I’m assuming the aide responsible for giving an Attaboy to Qaddafi after that performance is now planning to defect.

“Where’s @CongJoeWilson when you need him?”

Mike Madden: RT @owillis:Qadafi: so this is what @glennbeck sounds like in a diff language.

Ben Smith: Qaddafi: You are the ones who hate the Jews.

Mark Knoller: At 90 minutes into the Qadhafi speech, 2nd shift of UN translators come on duty.

Mark Knoller: Qadhafi even has his own health care reform: accuses capitalist countries & companies of creating viruses then charging for vaccinations.

Mike Madden: Khaddafy: “Perhaps tomorrow we shall have a fish flu.” Perhaps! Can we get him to weigh in on the Baucus healthcare markup?

Chris Lehmann: Wow, this Qaddafi speech is longer than a Saturday Night Live sketch. Funnier, too.

Ari Melber: Even for Gaddafi, #imaletyoufinish

Jake Tapper: Where’s @CongJoeWilson when you need him?

Jake Tapper: I would fact check this Qadaffi speech but…..well…..I got a life to lead….

Mark Knoller: Qadhafi calling for UN investigations of assassinations including JFK – and the killing of “Lee Harvey” by Jack Ruby.

Mike Madden: Could someone fill me in on how Gaddafi started talking about Jack Ruby?

Jake Tapper: I think Aaron Altman had it wrong about this guy.

Mark Knoller: Qadhafi calls for UN investigation of US-led Iraq war on Iraq which he calls “the mother of all evils.”

Seth Colter Walls: Wondering how long it will take someone to mash up Qadhafi’s UN appearance with Yeezy’s VMA interruption. Couple hours?

Mark Knoller: Qadhafi now calling for UN to be moved from NYC to another location in the world. “I want to relieve America from this hardship.”

Jake Tapper: Qadaffi talking about some disease created in a lab perhaps as a military weapon – translation spotty so not sure what hes talking about.

Mark Knoller: Quite a sight to see Qadhafi at the lectern of the UN General Assembly. During Reagan years, Qadhafi was seen as lead terrorist in world.