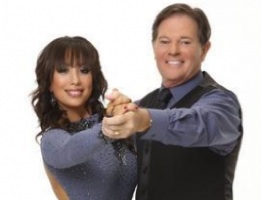 Former Republican House Majority Leader Tom Delay made his long-awaited debut on ABC’s “Dancing with the Stars” on Monday, and the media’s reaction yesterday seemed to focus on showing that “The Hammer” is a tool. While the spectacle of Delay cutting a rug and talking about “getting in touch with (his) feminine side” has undeniable trainwreck appeal, is it really appropriate to pile on a guy who is clearly having fun at his own expense?

O’Donnell and his guest are actually rather kind to Delay regarding his performance, but their unmistakable glee at his misfortune saps a lot of fun from the segment. The judges, too, seem to delight in pointing and laughing at Delay, instead of crediting him for really going for it. They miss the point, that the humor of the performance is that it is surprisingly accomplished.

While I could knock Delay for his “feminine side” remarks (I dare him to say that at the late Patrick Swayze‘s Road House), I’m more dismayed at Jack Cafferty‘s reaction, and Huffington Post’s seeming agreement with it:

Now, Jack Cafferty is not a guy I would expect lots of sensitivity from, but when he’s basically joking that Delay is making himself a target for prison rape, I would expect HuffPo to point out that this is not such a funny idea.

Newsweek’s Holly Bailey comes close to laughing with Delay, not at him.

Seriously, we already get it, Delay’s not a prince of a guy, and Dancing with the Stars is not a night at the Met. Mocking Delay in this situation is the boring, obvious choice.

It reminds me of a piece of advice that Sergio Leone once gave to Clint Eastwood. “Shoot your love scenes like action scenes, and your action scenes like love scenes.” In this case, when the story is this funny on its own, it’s funnier to play it straight, and vice versa.