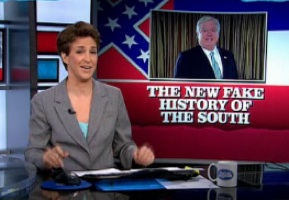 Haley Barbour is not only the Governor of Mississippi, but he leads the Republican Governor’s Association (which recently received a $1 Million donation from News Corp.) and is also considered a serious Republican presidential candidate for 2012. During a recent interview with conservative website Human Events, Barbour recalled his memories of growing up in a relatively tolerant and integrated South, claiming it was the “old Democrats who had fought for segregation so hard.” Enter Rachel Maddow and Eugene Robinson to fact-check, and well, it’s not a pretty picture.

Maddow airs a clip of Barbour making the following claim:

The people that led the change of parties in the south, just as i mentioned earlier, was my generation. My generation, who went to integrated schools. I went to an integrated college. never thought twice about it. It was the old democrats who had fought for segregation so hard. by my time, people realized that was the past. It was indefensible, wasn’t going to be that way anymore.

It’s fair to say that Rachel Maddow and her producers took issue with this comment. In the following segment they take it apart and air out lots of evidence that belies Barbour’s apparent memories of a happily integrated Mississippi, that was changed for the better because of his generation.

It’s also worth pointing out that this sort of “evisceration” of a public political figure by Maddow, usually leads to fund-raising letters on the behalf of the individual featured. So, perhaps Haley Barbour will soon be considered a lot more serious candidate for President in 2012.