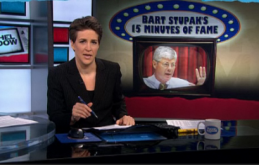 Now that Congressman Bart Stupak is back in the national conversation thanks to his announcement yesterday that he would hold up the health care bill unless stricter language regarding government funding of abortion was added, he is also back in the sights of Rachel Maddow!

Last fall, when Stupak first came to the nation’s attention, Maddow spent a not insignificant amount of time on her show investigating both the Congressman and the details of his amendment. Last night she picked up where she’d left off, doing some digging regarding Stupack’s connections to the C-Street house in D.C. — the $1.8 million house (equipped with meals and maid service!) is controversially registered as a church and reportedly affiliated with a somewhat secretive Christian organization known to some as The Family (Sen. Ensign and Gov. Sanford were also residents).

Stupak very recently moved out after living there for many years and paying only $600 rent, which, as Maddow points out, is far below market value for…just about anywhere. So who was footing the rest of the bill? Was this reported as an ‘In Kind’ donation? And if it’s not ‘The Family” (they have denied any connection to the house) than who is it. The real question Maddow is subtly getting at, of course, is that if it was ‘The Family” who was subsidizing Stupak’s lifestyle than how much influence, if any (Stupak is reasonable moderate on other social issues like Gay Rights), are they wielding over Stupak’s amendment and his current threat to kill health care. Video Below