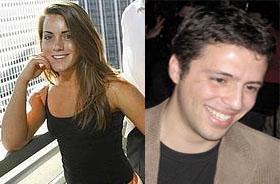 Love is in the air at Andrew Breitbart satellite blog Big Journalism, where ACORN gumshoe Hannah Giles (the “prostitute” to James O’Keefe‘s “pimp” and woman who exposed Max Blumenthal‘s booger problem) is exhibiting some strangely moderate behavior. After a light-hearted crash course in the early life of a future CPAC superstar, Giles explains that she is not alone in being a young journalist out to find the big story, but she wouldn’t mind being a little less lonely at dinnertime. And she’s willing to reach across the aisle to find her Prince Charming. Ezra Klein, sounds like you have some cooking to do.

If you ignore the title of her post (a pretty blunt “Ezra Klein, Will You Cook Me Dinner?“), Giles is narrating the compelling tale of the next generation of journalists, a ragtag group of idealists out to set the record straight on their beliefs and keep the politicians and special interests in line. Her story in particular of being taught by her parents to feel no fear, of demanding to be home-schooled because she was afraid of the public school system, and her rise to the top of the young media world sounds like it should stand alone as an inspiration to all the young conservatives out there thinking of a career in the press. But then she talked about her latest crush:

Klein is a highly motivated individual who has definitely turned heads in Washington, and is well on his way to taking over. And he isn’t some malicious power hungry conspirator, working from the bad-guys version of the bat cave. He’s just a dude with a vision, and has the creative diligence to go out and make it real.

Not to mention, he made it on Jezebel’s Top ten sexiest everyday men of 2008 list, and is an avid health-food chef. Mix drive, intelligence, a national platform, looks and cooking skills and the nation has itself a new young liberal leader. […]

So here’s my challenge to Mr. Klein: how about it, Ezra? Will you make me dinner one evening? Let’s put our ideas to the test and see who wins.

Well, can’t really blame Giles for taking advantage of her newfound fame. Plus, Klein is quite fetching – though, clocking it at two years older than Giles, I feel like a bit of a cougar admitting it.