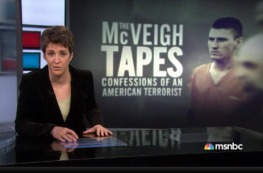 Last night MSNBC aired its much-promoted special ‘The McVeigh Tapes’ hosted by Rachel Maddow. The special used 45 hours of never before heard interview tapes that were conducted with Timothy McVeigh before he was put to death in June 2001, along with somewhat disconcerting digitally enhanced reenactments of the events as he describes them, as well as a number of moving interviews with survivors.

Promos running on MSNBC these last few weeks made the not-so-subtle connection between today’s endlessly talked about Tea Party movement and the violence McVeigh wreaked upon the Alfred P. Murrah Federal building in Oklahoma: “15 years later can McVeigh’s words help us understand today’s anti-government extremists.” However, the closest Maddow came to making a similar connection during last night’s special was when she said this at the outset:

“Nine years after his execution, we are left worrying that Timothy McVeigh’s voice from the grave echoes in a new rising tide of American anti-government extremism. On this date, which holds great meaning for the anti-government movement, the McVeigh tapes are a can’t-turn-away, riveting reminder.”

You can watch and draw your own conclusions about that, though I have to say the only thing the special reminded me of was a) Timothy McVeigh was a mad man and b) how different this country was in 1995; at one point there’s a news clip of Tom Brokaw reporting that “some group calling itself the Nation of Islam saying it was responsible…that has not been confirmed” and it’s so clear from his tone how unfamiliar his audience, and possibly himself, is with the idea of a domestic terror attack. An utterly different world. Beyond that the most interesting part was less hearing from Timothy McVeigh himself, than hearing from the people who had survived the bombing and tried to continue on with their lives.