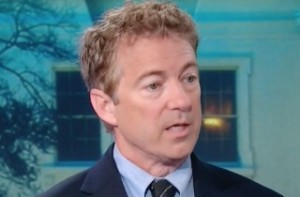 “I think there’s an appeal when people offer you something for free. They just don’t think to the next step of, ‘Where’s the free coming from? So if you have 1,000 college kids and tell them you’re going to give them free tuition, they’re like, ‘That sounds good, I’m for that,'” Paul said, adding that their “next question is, what about free cars? What about free clothes? Free makeup, free shoes? Everything should be free. But it can’t be free, somebody has to pay for it.”

Paul suggested that the answer to high college tuition rests, instead, in a free marketplace. “The internet should be able to bring the price per pupil down to almost zero. Think about it, one professor can teach everybody in the whole world… should be pretty cheap to go to school,” Paul said.

“Schools charge the same thing whether you’re sitting in the classroom the bricks and mortar, or whether you’re at your own house. Same price,” Paul noted. “That wouldn’t happen in a marketplace, that only happens when government controls the entry to the market place.

Paul said when discussing college tuition prices, “everybody starts with the sympathy argument, the sympathy for the student having to pay so much,” suggesting he’s sympathetic to the obstacles they face. “But the thing is I wanna know why it costs so much and how we could fix the cost problem,” Paul concluded.

Watch the video above, via Fusion.