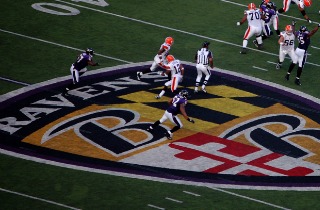 Baltimore Ravens owner Stephen Biscotti wrote an open letter today to fans and stockholders of the Ravens franchise, apologizing for the poor way they handled and how they dropped the ball on investigating the Ray Rice fiasco.

Biscotti explains, in some detail, the events leading up to Rice’s contract termination this week. As he tells it, the Ravens investigated what happened within days of the assault, speaking with the casino, the police officers who arrested Rice, and the prosecutor.

As for the video released showing what happened inside the elevator, Biscotti swears they asked for it but the casino would not hand it over (echoing similar comments made by NFL Commissioner Roger Goodell earlier today):

We contacted the casino management and asked if there was video of the incident from inside the elevator that we could see. The casino would not share such video. We asked the local New Jersey police and the police refused as well. We asked the prosecutor’s office and that office refused. It was our understanding at that time that Ray’s attorney had not yet seen the video. NFL officials had been informed, and we know they were also trying to retrieve and/or see the video.

The team ended up “halt[ing] our fact-finding,” which Biscotti acknowledges as an unbelievable mistake on their part. He says that after seeing the video, “The decision to let Ray Rice go was unanimous. Seeing that video changed everything. We should have seen it earlier. We should have pursued our own investigation more vigorously. We didn’t and we were wrong.”