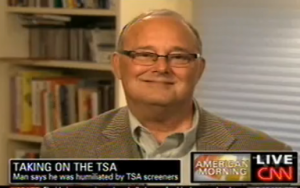 Remember the story of the bladder cancer survivor who said he was “humiliated” by an intrusive airport search at the hands of a TSA agent–a search that was done in such a way as to rupture the man’s urostomy bag at the TSA checkpoint? Thomas Sawyer described the incident–and the way it made him feel–last fall, arguing that the TSA needs to focus on showing travelers respect when they have special issues that might require a little discretion (and, as he correctly pointed out, all travelers have the right to ask for (demand) that a hand search be done in private). In the aftermath of his nightmarish experience, Sawyer met with TSA chiefs in Washington, got a bunch of heartfelt apologies, and shared his thoughts. And then last week it happened all over again.

“Before I could even get (out) the words, ‘I want this done privately,’ the TSO agent began patting me down in public,” said Sawyer. “I said ‘Whoa! I have a medical condition.’ He said, ‘I know,’ and continued the pat-down.” As MSNBC reports, Sawyer filed a formal complaint:

“I just don’t get it. Why can’t the Detroit TSO agents follow the procedures? This pat-down was rough and not done appropriately,” said Sawyer. “The screener squeezed my bag several times and they are not supposed to even touch it.”

However, the seal on his urostomy bag did not break this time, Sawyer told msnbc.com, despite news reports claiming that he was once again left covered in urine.

TSA spokesperson Greg Soule said the agency takes every passenger’s claim seriously. “We are reviewing the circumstances surrounding this passenger’s screening to determine if the proper procedures were followed,” he said.