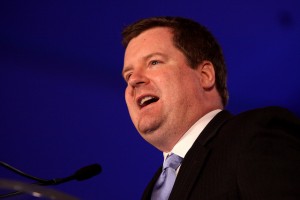 Congratulating President Obama on his second inauguration, RedState’s Erick Erickson penned a piece on Tuesday that aimed criticism toward his fellow conservatives. His message: enough with the perpetual outrage.

The president’s policies are destructive to the economy, Erickson asserted, but “I do not think the President means to do this maliciously. I do not think he is treasonous. I do not hate him. I am not outraged by it.”

The outrage can instead be directed toward Republicans: While Obama is doing what he set out to do, Republicans are not. And speaking of outrage, could we perhaps have less of it?

We have too many outrage pimps on both sides of the aisle whipping the respective bases into a frenzy and fury against the other side. I don’t have enough time or energy to be outraged about it all. There are things to be outraged by, but not everything, and certainly not with full energy dedicated to every perceived slight and grievance.

What I am finding is that among conservatives there is too much outrage, piss, and vinegar. It makes our ideas less effective. We have become humorless, angry opponents of the President instead of happy warriors selling better ideas. We are not even selling ideas.

No one wants to listen to conservatives as “professional victims,” always “bitching” and “whining” about Benghazi or the Fast and Furious scandal, Erickson contended. Yet conservatives do just that rather than effectively conveying the benefits of free markets and harm of big government. How, he asked, does that help the cause?

“Be happy,” he advised. “And if you must be angry, don’t be angry at a President doing what he set out to do, be angry at a Republican Establishment not doing… well… much of anything.”