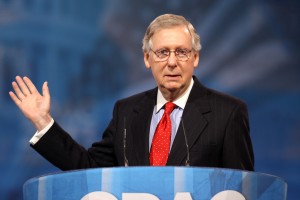 After the shocking news of the passing of Supreme Court Justice Antonin Scalia Saturday afternoon, the Beltway and media faithful descended onto conversations of political implications within minutes. Only one hour after the official confirmation that Scalia’s body had been found at a ranch in Texas, Republican Senate Majority Leader Mitch McConnell released a statement saying, “The American people should have a voice in the selection of their next Supreme Court Justice. Therefore, this vacancy should not be filled until we have a new president.”

While many were still hearing about Scalia’s passing, McConnell’s admission revealed that any effort by President Barack Obama to nominate a Judge in his remaining eleven months in office would be rebuked. This started a firestorm of similar talking points hours later at Saturday night’s GOP debate in South Carolina, and the Sunday shows became a back-and-forth on constitutional nominating rights during a lame duck Presidency and election year.

However, it would appear as if McConnell has not always felt that a President should defer the privilege of nominating someone to serve in the judicial branch.

Records from the States News Service from May 19, 2005 indicate that McConnell once argued, “Any President’s judicial nominees should receive careful consideration. But after that debate, they deserve a simple up-or-down vote. . . . It’s time to move away from advise and obstruct and get back to advise and consent. The stakes are high . . . . The Constitution of the United States is at stake. Article II, Section 2 clearly provides that the President, and the President alone, nominates judges. The Senate is empowered to give advice and consent.”

And on the floor of the Senate that same day — at a time when Republican President George W. Bush was set to replace Sandra Day O’Connor on the Court and his party had fewer than the 60 required superdelegates in the Senate — McConnell continued:

Because of the unprecedented obstruction of our Democratic colleagues, the Republican conference intends to restore the principle that, regardless of party, any President’s judicial nominees, after full debate, deserve a simple up-or-down vote. I know that some of our colleagues wish that restoration of this principle were not required. But it is a measured step that my friends on the other side of the aisle have unfortunately made necessary. For the first time in 214 years, they have changed the Senate’s ‘advise and consent’ responsibilities to ‘advise and obstruct.’… Given those results, many of us had hoped that the politics of obstruction would have been dumped in the dustbin of history. Regretfully, that did not happen.

It would now appear as if the McConnell-led Senate Republicans are the ones looking to “change the rules”, citing the divisiveness of the 2016 campaign as a reason to hold off on the nominating process. Just yesterday Florida Senator Marco Rubio suggested to Chuck Todd on Meet The Press, “There comes a point in the last year of the President, especially in their second term, where you stop nominating.” The White House has made it clear that the administration will be moving forward with a nominee however “in due time”.