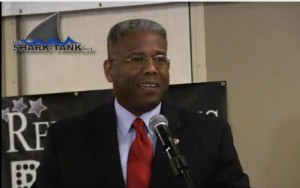 Rep. Allen West, the Republican Congressman from Florida, voiced his opinions today about “liberal blogs” — specifically the Huffington Post and Think Progress. Rep. West recently became aware of ThinkProgress’ article West’s 15 Most outrageous Statements after his staff assistant informed him of the post. He mocks the article by mimicking the most outrageous statements in a penetrating Steve Urkel voice.

Apparently, as West recounts, his staff assistant was laughing uncontrollably, to which West explains:

Why is it “hilarious”?

There are people out there on the other side that are actually tracking every little single thing I say. And they had the top ten things that Allen West is saying. And you know? It really started to look like a bunch of whiners: “He said nuts!“ ”He said he doesn’t want a liberal message in America!“ ”He said…”

What I can’t understand for the life of me is how people on the other side can certainly dish it out, but when you stand up on principle, when you tell them what you believe in, they can’t take it! They act offended and they act hurt.

His explanation of the hilarity was met with applause, and he continued, “So, I know that whatever I say tonight is going to show up somewhere,” the Congressman said with a smirk, “and I know that the Huffington Post will be going, you know, apoplectic tomorrow from whatever comes out of my mouth.”

As expected, Think Progress was displeased with the mockery and Zachary Bernstein responded, “Ironically, while calling us ‘whiners,’ it’s West who seems to be overly sensitive about a story that simply presents 15 of his own quotes.”

Watch the video from Shark-tank.net below: