Report: Apple Patents Technology That Will Stop Users From Taping Live Events With Their iPhones 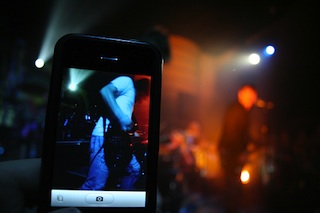 So here’s the situation; imagine you’re at a concert seeing the latest, uh – what do the kids like? – let’s say…MGMT show. They’re still cool, right? Anyway, you’re watching them and you know your best buddy’s favorite song is…I don’t know…”Time to Pretend” or whatever. So, when the band kicks into it, you pull out your phone to video tape the song so you can show your friend a fuzzy version with unbearable audio ostensibly to share the experience but mostly just to make him jealous. Anyway, the instant you hit record, technology in your phone recognizes your taping a concert and instantly shuts the recording down. Crazy? Not if a reported patent filed by Apple goes through.

The new patent, which was filed 18 months ago, but only became public recently and was reported in an article from The Times of London (article behind paywall) shows the technology as using infra-red sensors to discover when a user is recording certain live events. This will shut down the camera although the rest of the phone will still work fine.

“The software is seen as an attempt to protect the interests of event organizers and television broadcasters who have exclusive rights to film an event. These companies often sell their own recordings but are frustrated when cell phone videos appear online via websites such as YouTube, allowing people to watch the concert free.

The concept may also allow Apple to reach more favorable terms with record labels when negotiating deals to sell content though its iTunes online store.”

I’m torn. On one hand, this seems like an incredibly controlling and and unnecessary measure and a frightening portent of things to come, not to mention the fact that there have been so many legitimate news stories that have used cell phone videos of live events as their primary source. What happens when all the cell phones have this? And then the Flip Cameras? And then the concept of shutting down filming capabilities becomes common place for things beyond mere entertainment events?

On the other hand, cell phone videos of concerts almost always suck.