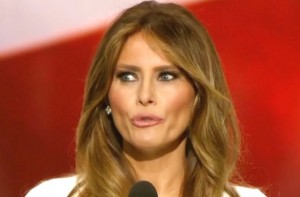 A new report is suggesting that when President-elect Donald Trump takes office in January, the first thing in America that may become divided will be his own family.

The New York Post has been in touch with a source close to Trump’s transition team, who told them that upcoming First Lady Melania Trump will continue to reside in her Trump Tower penthouse. The reported reason for this is so that Mrs. Trump can stay close to her 10 year old son, Barron Trump, while he finishes the year at his private school, Columbia Grammar & Preparatory School.

“Melania is extremely close to Barron, and they have become closer during the campaign,” the source told the Post. “The campaign has been difficult for Barron, and she is really hoping to keep disruption to a minimum.”

Melania Trump reportedly said that she will travel to Washington when necessary, but in the meantime, her continued stay in New York will most likely entail a continuation of the high-security measures around her home. Both Trumps might move to DC once the school year concludes, though there does not seem to be any definite plan yet on that account.

Previously, reports suggested that Trump might be reluctant to move into the president’s mansion full-time. Indications were that Trump was exploring possibilities to divide his time between D.C., and his various properties around the country.

Trump Communications Director Jason Miller has responded to the report, which was picked up by Huffington Post’s Igor Bobic:

Miller on report that Melania will stay in NY with Barron: "No formal statement has been released yet with family and transition plans"

Miller adds there is an "obvious sensitivity" to pulling a 10-year-old out of school in middle of the year https://t.co/32mynI6pse

UPDATE – 4:00 p.m. ET: McClatchy’s Anita Kumar confirmed that Bannon won’t join his father in D.C. until his current school term is over.

.@realdonaldTrumo was asked whether his wife and son, Barron, would be joining him there. "Very soon. After he’s finished with school.”