Report: Pilot Locked Out of Cockpit Before Germanwings Plane Crash 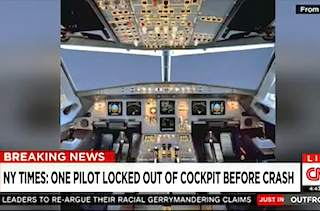 According to a new report from The New York Times, a cockpit audio recording from inside the Germanwings flight 4U 9525 that crashed in Southern France Tuesday morning has shed some new light on what might have caused the aircraft to go down, killing all 150 passengers and crew on board.

The recording reportedly indicates that one of the two pilots left the cockpit during the flight and was unable to get back in. The Times quotes an anonymous senior military official who has been involved in the investigation:

“The guy outside is knocking lightly on the door and there is no answer,” the investigator said. “And then he hits the door stronger and no answer. There is never an answer.”

He said, “You can hear he is trying to smash the door down.”

While the audio seemed to give some insight into the circumstances leading up to the Germanwings crash, it also left many questions unanswered.

“We don’t know yet the reason why one of the guys went out,” said the official, who requested anonymity because the investigation is continuing. “But what is sure is that at the very end of the flight, the other pilot is alone and does not open the door.”

Once the plane started its 38,000 mile descent, that lasted just 10 minutes before crashing into a mountain in the French Alps, there was no further communication between the cockpit and the ground.

Read the full report at nytimes.com.