Report: Ron Paul Has Not Attacked Mitt Romney In A Debate Once

Report: Ron Paul Has Not Attacked Mitt Romney In A Debate Once 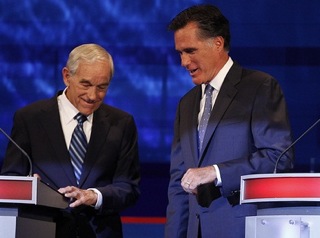 With Mitt Romney‘s position as assumed frontrunner on the balance before tomorrow’s primaries, the question of what role Rep. Ron Paul has played in keeping his other competition at bay has brought about talk of a possible deal between the two, which both deny. But statistics show at least some level of symbiosis. ThinkProgress took a look at Rep. Paul’s attacks on fellow Republicans, and found that the Congressman had left Romney completely unscathed, while targeting the rest of the field (and particularly Rick Santorum).

The study noted that, at least where debates are concerned, Rep. Paul was not one to back down from attacking. Except the attack was disproportionately directed towards Santorum, and evaded Romney entirely. They also provided this handy chart: 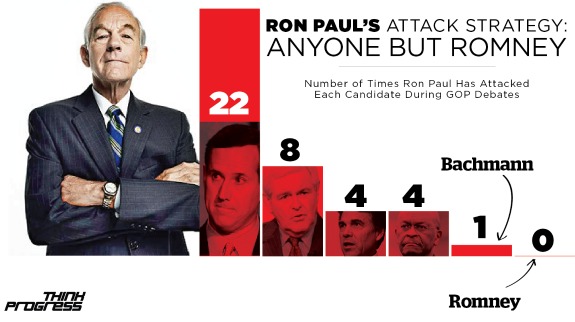 While the research was conducted by a left-wing publication, the numbers don’t really lie, though their conclusion on the matter can be disputed. Author Judd Legum posits that “Paul is effectively acting as Romney’s on-stage surrogate during the debates,” as well as running ads attacking Romney’s key rivals at critical times.” He leaves the question of why open-ended, though there are theories that go beyond a pact with the Romney campaign.

Allahpundit at Hot Air argues that, despite this, he doesn’t see too much evidence for any formal coordination between the parties, but only a natural overlap of interests within the Rep. Paul and Romney camps that would result in the former going easy on the latter at the expense of those with whom he has more severe ideological disagreements:

Paul’s advisors have been candid in interviews in explaining that his goal in running this time is to pile up delegates and gain some influence at the convention, either in terms of input into the party’s official 2012 platform or a primetime speaking gig or both. That being so, it’s only logical that they’d go easy on Romney. He was and is the likely nominee; the more helpful they are to him, the less resistance there’ll be to a convention role for the Paul family, especially since Romney will be nervous about alienated libertarians staying home if he freezes Paul out.

This seems like the more reasonable explanation for the unlikely Romney/Paul union– if the objective of the Paul campaign is to get on that podium in August, placing bets on Romney neither hurt Paul’s integrity if he doesn’t say anything overwhelmingly positive nor hurts his chances of getting on stage. Meanwhile, his public objection to Santorum and Gingrich is to be expected from his ideology and reinforces his brand of “honest truth.” But beyond those reasons, there is also the fact that Rep. Paul appeals to Republican voters more when talking about the economy and social issues as opposed to foreign policy– and foreign policy is the realm where he would most object to Romney’s policies. Redirecting his energies to Santorum on social issues and Gingrich on establishment Republicanism seems a more apt allocation of resources.