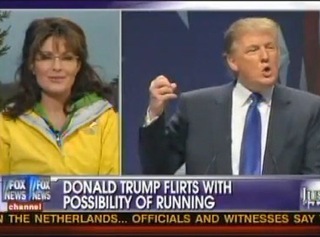 Just when it appeared Sarah Palin‘s road trip for America couldn’t confound reporters any further, she has decided to take a significant detour straight into the heart of Manhattan– no, not to visit Grant’s Tomb or get an autograph from the Naked Cowboy, but to meet with (still) potential challenger Donald Trump. ABC News’ Michael Falcone was the first to tweet the meeting of the minds, quickly followed by a blog post that does little to elucidate the thinking behind the meeting.

According to Falcone’s report, the meeting was Palin’s idea, and the two have agreed to convene at Trump Tower before heading out for a “low-key” dinner:

Sarah Palin plans to meet Tuesday night with Donald Trump in New York City, according to sources close to Trump.

Her office reached out to meet with Trump. The two plan to meet in his 45,000-square-foot apartment in Trump Tower and later plan to eat dinner together.

Sources say the restaurant will be low-key, not one of New York’s more upscale dining establishements.

Palin has been on a multi-stop tour of the East Coast for the last two days visiting historical sites, sometimes dodging the press, sometimes speaking to them.

What to make of it? Both potential candidates have been extremely coy about the possibility of running– though Trump has at least ruled out a run on the Republican ticket. Yes, they are both conservatives with big ideas for little government, and have the highest profile of anyone even remotely considered for the 2012 field. They stand nothing to lose by meeting, and the the media fascination with the two may end up becoming far greater together than the sum of its parts. As Palin has not exactly been forthcoming with the press on what her tour is about, one can expect she will be as mum about what this meeting is about as she has been about the entire adventure, leaving the primetime pundits to figure it out.