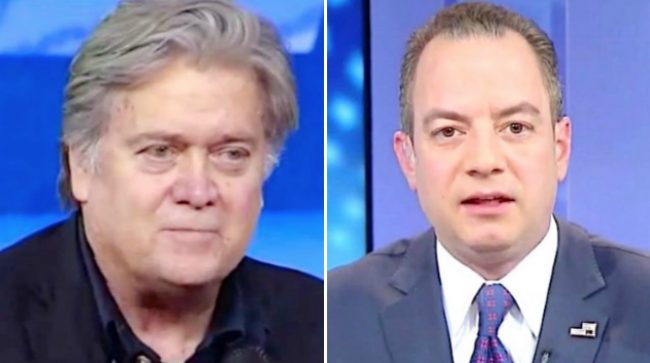 Steve Bannon was removed from his role in the National Security Council this week. Now a new report suggests that he and Reince Priebus are both on thin ice.

Advisers to Donald Trump have told Axios that the president may be thinking about making some broad changes to his inner circle in the near future. While it is not yet clear if Trump is ready to “pull that trigger,” aides have said that Bannon, Trump’s chief strategist, is on the chopping block.

The report also suggests that Trump might be losing patience with Priebus, and could fire his chief of staff as well. House Majority Leader Kevin McCarthy and economic adviser Gary Cohn are among those who Trump is reportedly considering from a list of potential replacements.

After Bannon lost his NSC position, there was a great deal of speculation about whether he was losing favor in the Trump orbit. Reports indicate that Bannon threatened to quit over this development, and that Bannon recently had a number of tense exchanges with Trump’s son-in-law and senior adviser, Jared Kushner.

Notably, Kushner has seen a rising level of influence and responsibility in the White House, though this has created concerns about nepotism in the administration.

As for Priebus, there have been separate reports in the past which indicated Trump has been angry and disappointed that Priebus couldn’t do more to advance his agenda with Washington insiders.

UPDATE – 3:28 p.m. EST: Fox Business’ Charles Gasparino says that Cohn is the most likely figure to become chief of staff if Priebus is let go.