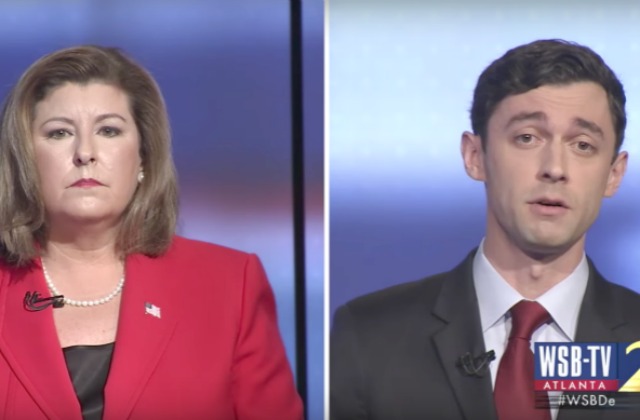 A reporter from The Washington Free Beacon was not allowed into an Jon Ossoff campaign event on the eve of the special election in Georgia.

Brent Scher of the Free Beacon tweeted this Monday night.

The @FreeBeacon has been told that it is not welcome at tonight’s @ossoff event pic.twitter.com/lzXfForIGG

Scher sent a followup tweet that pointed out the irony that the Ossoff campaign cheered “This is what democracy looks like!” while he was barred from being allowed in.

Other journalists tweeted out their support for Scher.

It was bullshit when Trump did this to outlets his campaign perceived as “liberal” and it’s bullshit when Ossoff does this now https://t.co/ez3CqGVaus

this is crap and outlets who aren’t on the blacklist should express their objections. https://t.co/2NEvI9GDJa

This wouldn’t even be acceptable if the @FreeBeacon reporter in question was @FBillMcMorris https://t.co/TSCTLMymKK

Candidate hasn’t even won election and is already adopting the ways of Washington nowadays. https://t.co/sJXtoKgtmw

Scher being barred from the Ossoff event may not be a coincidence. A few days ago, he published this article that alleges the Ossoff campaign was giving him a hard time… simply for doing his job. And earlier in the day, he fact-checked the Ossoff campaign’s claim that the Democratic candidate lived “three blocks” outside of the 6th District, which was something Ossoff received bad press about. Scher walked from Ossoff’s house to the district and his journey took him two hours, or 3.2 miles.

Also tonight, ThinkProgress reporter Kira Lerner is alleging that the campaign of GOP candidate Karen Handel blocked her from events after she confronted the Republican about health care earlier in the day:

My day in summary:

Update: Handel campaign blocked @thinkprogress from her final event of the day. Tell kate@karenhandel.com how you feel about that decision!

I was the only reporter blocked from Handel campaign event tonight

Ossoff and Handel face off tomorrow and recent polls show a dead heat between the two of them.