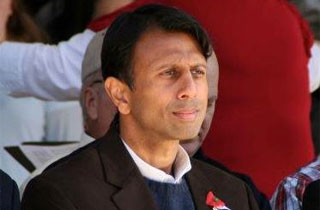 Tonight, Gov. Bobby Jindal (R-LA) is scheduled to speak in front of a group of pastors at a dinner in Greenville, S.C. He will likely have things to say that would provide great insight into his mindset as a potential 2016 GOP presidential candidate. Unfortunately, no one will hear them, thanks to a bizarre precondition set by the dinner’s organizers: Reporters can attend, but only if they agree to print approved quotes.

Normally, to prevent reporters from going away from an event with the wrong quotes, the event would be deemed “off the record” or simply “closed to the press.” But according to local paper The Greenville News, the dinner’s organizers, the American Renewal Project, told them: “News reporters aren’t allowed to attend unless they can agree with the candidate on which quotes to report”.

According to the group’s president, the policy is intended to prevent the media from twisting their words:

David Lane, president of the American Renewal Project, told The News he has little to gain from exposure in the news media.

Some reporters, he said, “have agendas” and “don’t even care what the truth is.”

It is unclear as to whether the Jindal team had any input in creating the press policy.

The American Renewal Project is a right-wing Christian group dedicated to mobilizing pastors across America with the hopes of returning the country to its Judeo-Christian roots. Lane himself is a highly influential conservative activist, with his group and its state offshoots hosting forums and dinners for well-known GOP politicians. (Next week, Jindal and Sen. Ted Cruz (R-TX) will headline a meeting of 200 pastors in Des Moines, Iowa.)

Unsurprisingly, agreeing to publish candidate-approved quotes is “something The Greenville News won’t do,” the paper said.

UPDATE (6:21 p.m.): A spokesman for Jindal clarified that the Governor “can be quoted” when reporters are around.

[Full disclosure: Tina Nguyen worked as an intern for the office of Gov. Jindal in the summer of 2008.]
[The Greenville News]
[Image via Bobby Jindal/Facebook]