Rick Womick | Muslims In Military | 'We Cannot Trust Them'
VIDEO

Tennessee Republican Rick Womick On Muslims In The Military: ‘We Cannot Trust Them’ 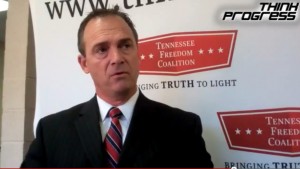 Eli Clifton and Lee Fang of Think Progress broke a story on Veteran’s Day concerning Tennessee state representative Rick Womick and his fear of Muslims in the military. Asked whether or not Muslims should be forced out of the military, Womick told Fang, “Absolutely, yeah.”

On Wednesday, Think Progress’ Faiz Shakir discovered video from the “Preserving Freedom Conference,” where Womick told a room of people that, “we cannot have Muslims in our military because we cannot trust them.” Many in the crowd gave him a standing ovation.

As inflammatory as his statements are, Womick deserves at least a little bit of context. After serving as an F-15 Fighter Pilot through the first Gulf War, Womick became an airline pilot, based out of Nashville. When the September 11 attacks occurred, he was in the air, flying a plane from Dallas to Los Angeles, with 140 passengers on board. If you watch the extended interview with Fang (below), Womick proves himself to be more well-researched on the Koran than his seemingly-flippant sound bites make him out to be. “I was flying on September 11th,” he told Fang, “and that’s when I really started to study and learn who the enemy was.”

Later in the interview, Womick tends to waver just a little bit, saying that while true believers of Islam are commanded to, “kill anybody who will not convert,” those who don’t fully commit are fine by him. The sticking point is that the true believers are also told to lie, so there’s really no way of knowing who to trust:

“Personally,” Womick said, “I don’t trust one Muslim in our military.”