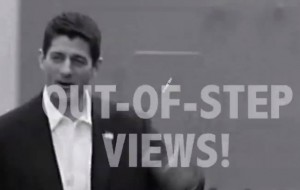 As the Republicans hold their eponymous National Convention in Tampa this week, the Obama campaign has released an ad that perfectly captures the party’s frozen-in-time cultural and policy positions, as best personified by vice-presidential nominee Rep. Paul Ryan. The not-so-subtle message of the newsreel-style spot is a Proustian evocation of the era that Ryan and company’s agenda would bring America back to, a fond one for white males like Ryan and Mitt Romney, but not so much for everyone else.

The Ryan spot is pegged to his budget, which would take us back to the good old days before there was Medicare, and his views on women’s health care, which would rewind straight past Roe v. Wade, and right back before Griswold v. Connecticut, the landmark Supreme Court case which established that the right of privacy protected women from a state ban on contraception. While Mitt Romney now says he believes in exceptions for rape and incest, both he and Ryan support personhood laws that would criminalize most forms of contraception, as well as most abortions.

However, the ad’s tagline, “Mitt Romney and Paul Ryan would take us back,” is a reminder that the Republicans’ favorite bygone era, pre-Medicare and pre-Griswold, also happens to be a time when it was still legal to prevent certain people from voting. The style and the substance of the ad demonstrate that, on occasion, dog whistles work both ways.

Here’s the video, via Youtube, followed by the memo that accompanied it:

CHICAGO—Obama for America released a new web video today that asks why Americans are so apprehensive about Paul Ryan. Is it his commitment to the failed top-down economics of the past with tax cuts for the wealthiest? Or his promise to turn Medicare into a voucher system—ending the program as we know it? Perhaps it’s Paul Ryan’s views towards women that makes Americans nervous: sponsoring anti-abortion legislation that used the term forcible rape, voting at least four times to defund Planned Parenthood, and fighting against the Lilly Ledbetter Fair Pay Act, which helps women fight for equal pay for equal work.

President Obama will continue to move the country forward toward an economy built to last with a strong middle class, but Paul Ryan has made it clear that he’ll take the nation back to a very different era – including same failed policies that crashed our economy in the first place. That’s the clear choice Americans face in this election.