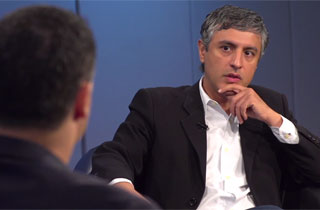 Noted scholar and prominent Islamic voice Reza Aslan today fired back at Sam Harris, the atheist journalist who recently appeared on that controversial Bill Maher panel, after the latter wrote a blog post claiming that Aslan’s rhetoric about Islam had taken on a more “sinister” tone.

“I don’t know what his agenda is, beyond riding a jet stream of white guilt from interview to interview, but he is manipulating liberal biases for the purpose of shutting down conversation on important topics,” Harris, who had once called Islam a “motherlode of bad ideas,” wrote.

In a response on The Young Turks, Aslan rejected Harris’s premise and said that his atheism had begun to take on a fundamentalist tone, itself. “When you combine an absolute sense of certainty with the kind of the literalism that I have already described, with a utter sense of siege…that’s called fundamentalism,” he asserted. “It doesn’t matter whether it’s religious fundamentalism or atheist fundamentalism, and it needs to be rejected by all people.”

“The problem with not just Sam but with the new atheists in general is that they give atheism a bad name. My greatest intellectual heroes are all atheists… but they were experts in religion. They understood religion and then criticized it from a place of expertise, and there is lots to criticize about religion.”

But what is happening now is that a guy sort of sitting in his room watching television with a blog has now become a self-described expert on religion and espouses the most basic, uninformed, and unsophisticated views about religion from a position of intellectualism. And I think that’s dangerous, because I understand your animosity towards religions, but even you understand religion is not going anywhere…. What it does is it keeps us from having some very important and necessary conversations about the role of religion in society, about the problem of extremism in religious communities, and about how to reconcile the realities of the modern world with these contextual scriptures that so many people nowadays view incorrectly as literal and inerrant.”

Watch a portion of the interview below:

And the full conversation: