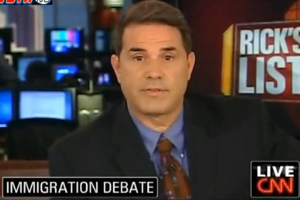 Alabama gubernatorial candidate Tim James has become a national punchline for his “this is Alabama; we speak English” ad, and while the ad was originally probably only good as fodder for the liberal satirists over at Wonkette, the Arizona immigration law has made its blatant xenophobia newly relevant. And to Rick Sanchez, who isn’t a native English speaker, it gave him a chance to indulge in the delightful irony of making fun of someone else’s accent, for a change.

Sanchez is at his best when he attacks racism from the perspective of being one of the few immigrants on cable news, and his mockery of James is no exception. In these cases, Sanchez adds a voice to the media community that, as diverse as the cable news networks have attempts to be, is often lacking. That’s not to say that Sanchez’s southern accent is any better than what we can expect James’ Cuban accent sounds like– nor does it seem he was going for accuracy– but to see Sanchez not bother with trying to be objective on the matter and simply letting himself angrily ridicule James makes for great TV.

Unfortunately, Sanchez is also making a mistake that CNN has decided to adopt as truth since the ad became popular on the internet: equating Tim James with the Arizona immigration law. The Tim James ad began to air in Alabama before Arizona passed the law, and James is not arguing about anything related to illegal immigration. If he was making that sort of claim, he would have attacked multilingual citizenship tests. Instead, he just tries to present himself as a fiscal conservative and comes out looking like a racist.