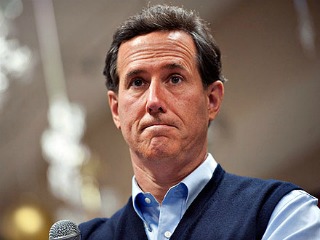 “I’m not a theocrat,” he replied. “I’m not someone who has any evidence anywhere that I’ve ever imposed my values. I have values; I articulate those — as I encourage everybody else to do and respect everybody else’s opinion and difference of opinion.” Tolerance, he added, is what America is all about. Meanwhile, he argued, President Barack Obama is the one who is “imposing his view on people of faith.”

“The word ‘tolerance’ is often used against conservatives,” Ingraham responded. “Right? You’re ‘intolerant’ because you have beliefs.”

Santorum — who has been accused of misrepresenting Kennedy’s comments — told Ingraham he wishes he could take that “particular line” back.

Have a listen, via The Laura Ingraham Show: