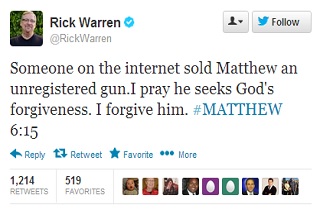 Pastor Rick Warren, the influential leader of the Evangelical Christian Saddleback Valley Community Church, has been reeling from the sudden, tragic suicide of his 27 year-old son, Matthew Warren. Last Friday, Matthew took his own life with a self-inflicted gunshot wound, and on Thrusday, Pastor Warren revealed, via Twitter, that “Someone on the internet sold Matthew an unregistered gun,” adding that “I pray he seeks God’s forgiveness. I forgive him.”‘

According to police, the gun Matthew used could be difficult to trace. From The Associated Press:

The Orange County Sheriff’s Department is trying to find the seller but it won’t be easy. The gun’s serial number was scratched off, making it impossible to trace, spokesman Jim Amormino said.

“We can’t tell if it’s registered or not because the serial number is scratched off,” he said. “At one point in time, it may have been, but it’s going to be impossible to find out.”

It’s illegal in California to buy a gun without a background check and purchasers are supposed to register their firearms. Defacing a gun’s serial number is a federal offense.

Rick Warren has been a politically polarizing figure due, largely, to his views on marriage equality and his delivery of the invocation at President Obama‘s first inauguration, but no decent human being could be numb to the heartbreak that Pastor Warren must be going through. This latest detail will, no doubt, create the inertia to draw Rick Warren into another heated political debate, but his son’s death defies easy answers. In a statement announcing his son’s death, Pastor Warren said “Despite the best healthcare available, this was an illness that was never fully controlled and the emotional pain resulted in his decision to take his life,” and he obviously did not want for a loving, supportive family.

California’s tough gun laws, including registration and background checks, couldn’t have helped prevent this specific case, since the serial number-defaced gun would have been illegal no matter what. Tough gun laws could, however, result in a stiff penalty for the seller, if he’s caught, and make other would-be sellers think twice about selling defaced guns.

But in the conversations about preventing gun violence, there’s too often a desire to draw a straight line, from a specific policy to a changed outcome. We live in a country in which gun suicides outnumber gun homicides by two-to-one, and in which the most common methods of attempted suicide are the least effective, and one of the less common methods is, by far, the most effective: 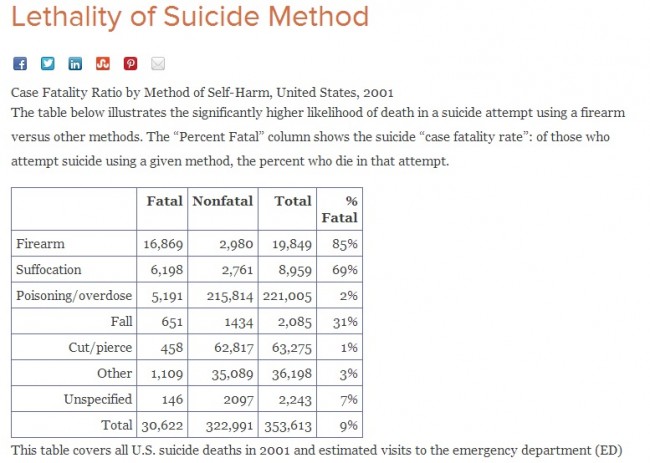 Rick Warren’s son had the best healthcare that money could buy, but not everyone can say that. There is a correlation between the amount of money a state spends on mental health, and lower rates of gun deaths.

In any case, it’s clear that attempted suicide by gun is far more lethal than other methods, so while it appears that no law was going to keep that gun out of Matthew Warren’s hands, restricting the access and availability of firearms to those with serious mental illnesses would clearly save lives. Nine out of ten people who survive an attempted suicide do not go on to die from suicide.

Right now, there is a wide-ranging debate about what to do, how to fix the problems that cause gun violence in our country, and whatever course we decide to take, we should remember that the stakes for many of us are extremely high, and weigh those stakes carefully.