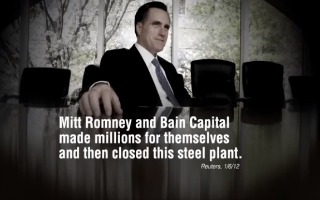 As summer draws to a close, the most brutal period of the campaign season is upon us. Marking the dawn of this auspicious stage, the pro-Barack Obama Super PAC Priorities USA has smashed through the hazy bliss of late summer with all the subtlety of the Kool-Aid Man after releasing an ad that links Mitt Romney to the cancer-related death of a steelworker’s wife. In releasing this ad, Priorities has highlighted precisely why negative ads are critical to politics and why each side secretly hopes their opponents will embrace the most unhinged of attacks – negative ads have the most potential to backfire. Priorities’ latest is one such ad.

“Understands” features a steelworker who was laid off, along with many of his colleagues, when the Kansas City steel plant GTS Steel after Bain Capital was brought in to restructure the firm. The worker describes how his life was irrevocably altered for the worse when he lost his job and health coverage. He says that his wife, who was suffering from cancer, passed away years and years after he lost his job.

The ad pulls on every human’s heart strings and the subject’s situation is deeply lamentable, but it is nearly certain to backfire. This is not the first or even the second ad that the Obama campaign and loyal PACs have fielded that feature the shutting down of GST Steel, which is a difficult story for the Romney campaign to have to explain away. In the story of creative destruction that is unleashed by venture capitalism, the tale of GST Steel is nearly all destruction and not much creative.

But the Romney camp does not have to waste one minute responding to this ad due to its overreach. By attempting to link Romney to a closed steel plant, then to a worker’s lost job, then to that worker’s suffering wife, then to her inability to receive cancer treatments and, finally, to her untimely death is… well, it’s a stretch. The ad may fire up a few dispirited Obama supporters, but it will not move the needle for average and undecided voters – in fact, it is far more likely to turn them off to the Obama campaign.

The ad is part of a $20 million web and television campaign, but the ad’s 60 second length means that it is probably targeted at the democratic base online and at earned media mentions. The earned media attention the ad is receiving today could be either a blessing or a curse, depending on the audience that consumes the message behind “Understands.” The Democratic base will eat it up, but swing voters may be more leery of the ad’s message. This is why it is in the interest of the Romney camp to see that this ad gets all the media attention that it possibly can. “Mitt Romney: complicit in criminally negligent homicide” is a message that will do the Obama reelection team few favors.

History is littered with negative ads that backfired on the campaigns that field them. In fact, one does not have to go far back into the archives to find ads that were cited as the near principle reason for the electoral loss of the candidate that mounted them.

In 2010, Kentucky Senate candidate Jack Conway attempted, in all sincerity, to frame now-Sen. Rand Paul as a worshiper of the lesser-known deity “Aqua Buddha.”

The attempt to frame Paul as a polytheistic cultist did not go over well among Kentucky’s electorate.

Attacks on an opponent’s religion are often dangerous to the candidates that mount them. In 2000, Elizabeth Dole lost her bid to become North Carolina’s next Republican Senator when she accused her opponent, now-Sen. Kay Hagen, of being “Godless.”

Sticking with the religious theme, former Rep. Alan Grayson’s 2010 ad misquoting his opponent in an attempt to frame him as now-Rep. “Taliban” Dan Webster is infamous as an example of overreach and a subsequent backlash.

All these ads have common theme apart from the religious angle – they call into question the motives of the candidate’s opponent. The ads accuse the opposition of harboring a secret agenda that masks their true motives, which are invariably base.

The Romney campaign has been sensitive to this truism. In May, the Romney campaign was forced to disavow any knowledge of and publically admonish a loyal PAC which was reportedly preparing to air ads which linked President Obama to his former Pastor Jeremiah Wright. They knew that the attack on Obama’s motives and background, suggesting that the President secretly harbored the same antipathy towards American history as his pastor, was a losing proposition. The Romney camp was right to distance themselves from any group that would go that route – it would likely have led to a backlash.

In this same vein, Priorities has gone too far. Sure, Romney is rich – voters may reject a wealthy president. Romney has not released an arbitrary number of tax returns as defined by Democrats – that, too, may trigger some resentment among voters. But the electorate will reject the notion that Romney is complicit in a preventable death.

Voters may distrust politicians, but the persuadable voter (read: swing) does not see their public servants as universally malevolent actors. They will reject a campaign and a candidate that attempts to paint them as such.