Romney Clarifies: He Would Have Supported Auto Bailout, Only After Bankruptcy

Romney Clarifies: He Would Have Supported Auto Bailout, Only After Bankruptcy 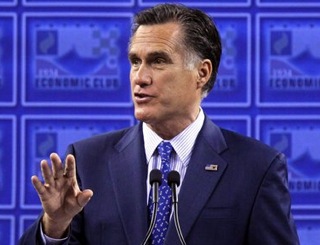 A while ago during a rally in Michigan, Mitt Romney stirred up the ire of many in his home state by arguing that auto companies– the ones that employ a large part of the more troubled communities in Michigan– should be allowed to go bankrupt. He stood by that statement in an interview with the Detroit News this week, but had a clarification to make: just because he supported the companies going bankrupt doesn’t mean he opposed the government helping them out after the bankruptcy process was underway.

In the interview, Romney argued that he did not see a reason for the government to keep hold of its shares of General Motors, arguing that this was the product of the President trying to use the shares for political gain. Instead of keeping the shares, Romney argued he would “get the company independent from government and run for the interests of the consumer and the enterprise and its workers — not for the political considerations of government officials.” Romney also replied to the attack from the Obama camp that he had called for the industry to completely fail by letting the companies go bankrupt. Romney clarified:

Obama campaign spokesman Matt McGrath said, “The last time Gov. Romney weighed in on the future of the auto industry, it was to suggest that we let Detroit go bankrupt, a betrayal no Michigander is likely soon to forget. As someone who was dead wrong about the industry’s present, Mitt Romney is the last person who should be offering advice about its future.”

Romney said the Democrats are “distorting” his record on the auto bailout, whose government-imposed conditions included filing bankruptcy.

“If they needed help coming out of bankruptcy and government support, that was fine, but I was not in favor of the government writing billions of dollars in checks prior to them going into bankruptcy,” he said.

As Sam Stein at the Huffington Post notes, the part about allowing the corporations to go bankrupt isn’t new– in fact, Romney write an op-ed in the New York Times titled Let Detroit Go Bankrupt. What is new is that he did not preclude the possibility of government help– though he had not explicitly said he opposed all government help, just that before the companies went bankrupt. Romney also had some positive words for the city of Detroit, saying, “if a leader can’t get things going, it’s time to bring in a new leader.”

The full interview with Romney will be out later in the week.