Romney: No, I Didn’t Make Racial Remark in Concession Call to Obama
video

Romney: No, I Didn’t Make Racial Remark in Concession Call to Obama 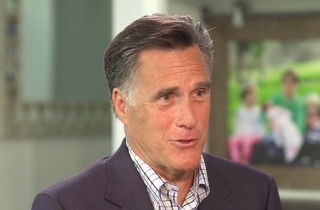 Former Massachusetts Governor and 2012 Republican presidential nominee Mitt Romney was the spotlight last month of a controversial part of President Barack Obama‘s former senior adviser David Axelrod‘s memoir that claimed Romney “irritated” Obama in his concession call during which he said the following, as recounted by Axelrod: “‘You really did a great job of getting the vote out in places like Cleveland and Milwaukee,’ in other words, black people. That’s what he thinks this was all about.”

For their part, a Romney aide quickly disputed that claim. But today, Romney finally got a chance to address the controversy himself, in an interview with Katie Couric of Yahoo! News. He said he tried to be “as gracious” as he could be at what was, for him, “a very difficult time.”

“I congratulated the president on winning and congratulated him on having a good campaign and running a good campaign. I may well have said what good job they did turning people out, because they did. But, by the way, I don’t even know what happened in Milwaukee, so some of those quotes are obviously a misunderstanding. But I had nothing but congratulations for the president and positive feelings that I expressed to him, just like I did in the remarks I made right afterwards.”

Couric pressed him on whether he said anything that could be construed as giving credit to the black vote during the concession call, but Romney maintained he “certainly did not.”

Watch the video below, via Yahoo! News: