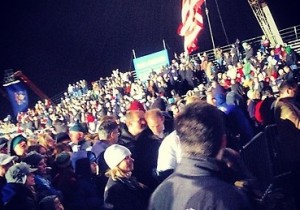 Republican presidential nominee Mitt Romney drew an estimated crowd of 25,000 to a “Victory Rally” at Shady Brook Farm in Morrisville, Pennsylvania Sunday night, but a delay in Cleveland caused the candidate to show up about 90 minutes late to the event. Reporters at the event tweeted various accounts of very cold rally attendees trying to leave, but being prevented from doing so by “volunteers, Secret Service,” and “campaign staff.” As one mother begged to get her “frostbitten” daughter out, The New York Times‘ Michael Barbaro reports a staffer told reporters “It’s not cold enuf for that.”

There were tweets from other reporters featuring varying degrees of alarm, including several from USA Today’s Jackie Kucinich that made the social media rounds swiftly:

There are several people here at Pa. rally who want to leave and aren’t being let out.

Man just pulled me aside and said “My son is on the verge of hypothermia” just as staffer starts letting people out a few at a time.

Woman says “I feel like a caged animal!” before pushing through staffer. Said she was here since 2.

People are literally streaming through the gates – Romney still speaking.

Both volunteers and a secret service were trying to keep people in- it was not just Romney staff.

Most reporters in attendance noted that the difficulty stemmed from security concerns, not from an attempt to maintain crowd numbers. As Kucinich reported, eventually, people were allowed to leave, and the problem seemed to be confined to the area behind the stage. The Huffington Post‘s Jon Ward reported that, despite the cold, there were satisfied customers:

People in crowd at PA event got here at 2 pm. Romney just walked on stage w Ann at 6:45 pm. long wait. But 1 guy said “well worth the wait”

Temp is 46 here but it feels colder. “you guys have been out here a long time,” Romney says after walking out to Rocky theme

That was way colder than 46 out there at Romney rally in pa. Wind whipping made it feel like 30s

I talked to close to 10 people as they left the romney rally early due to cold. A bit of frustration but didn’t get any anger from folks

Buzzfeed‘s McKay Coppins also pushed back against the idea that people were forced to stay:

FWIW, didn’t appear the campaign was trying to “trap” people in the PA Romney rally. They were leaving through Secret Service area. Many had been waiting in the cold for 5 hours, but they still seemed relatively upbeat as they left. One dude said, “Worth the wait.”

Romney HATES to be late and keep people waiting, but he is now running over an hour behind sked to his outdoor (32 degrees) PA rally.

This is a big rally for Romney in PA, but dozens of people — cold and angry — are begging to be let out.

Other people who left say they’re HUGE Romney supporters, just cold and tired, or with sick kids and spouses.

To be clear, the people asking to leave were delayed because of security concerns — not bc of a Romney staff decision.

What we seem to have here are a series of alarming reports, followed by a massive effort to walk them back. The reality is that when the Secret Service is involved, there are security protocols in place that you don’t see at other events, particularly around event staging areas. However, these tweets occurred over the course of twenty minutes or so. While Parker is correct that the Secret Service would restrict movement around the stage, the campaign press staff was perfectly capable of escorting these people out. This sounds like a combination of frustrated crowd members, and ill-prepared volunteers and staffers.