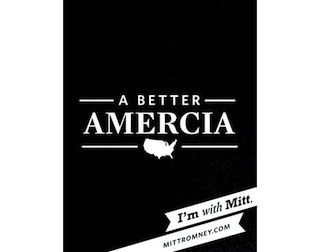 For months now, it’s seemed like conservatives and liberals haven’t just been disagreeing on the interpretation of the facts, they’ve been disagreeing on the facts themselves. Watching dueling panelists on cable news come on holding completely contradictory stats and figures can give a viewer a migraine. How is this possible? Are they from different worlds? Well, today we got an explanation when the Mitt Romney campaign released an iPhone app promising “A Better Amercia.” Clearly, Mitt Romney is literally running for election in some kind of parallel universe.

This makes so much sense. Most people are mocking the Romney campaign for making a spelling-related gaffe even more embarrassing than the time Dan Quayle visited a classroom. However, those people are missing the point. Romney’s camp didn’t actually mess up at all. Romney is running to be President of Amercia.

And, folks, Amercia is a weird, weird place. In Amercia, despite being just as much in the pockets of corporations as any other president, President Obama actually is a Socialist! In Amercia. In Amercia, it’s funny to tell stories about factories closing. In Amercia, Mitt Romney saved the auto industry.

It’s not just the campaign though! In Amercia, everything’s different! Donald Trump‘s opinion is relevant and he’s just really a blue collar guy. Black on white crime is actually a huge issue (unlike in America where it’s literally gone down under Obama). All women who use birth control are crazed sluts (it’s an epidemic!). Every protester hates capitalism. And for every gay couple that gets married, a straight couple is forced to divorce.

Wow. Amercia is terrifying. I’d hate to live there all the time.

But, I must say, a place that horrible and repressed and insane requires a strong leader to keep the peace. That’s why I fully endorse Mitt Romney as the President of the Parallel Universe that is Amercia. I hope he handily defeats Parallel Barack Obama, the guy who is Amercia’s current President and whom I assume has either a scary goatee or an eye patch or something.

Anyway, good luck, Mitt Romney! And now that we’ve figured that out, can all our news outlets go back to covering what’s going on in the real world?