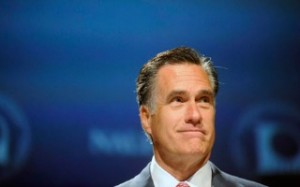 Mitt Romney is set to be officially named the Republican Party’s presidential candidate — and that formal nomination may come two days earlier than planned, as a result of the looming weather concerns and potential issues with Ron Paul supporters wreaking havoc.

Originally slated for Wednesday, Romney’s name may be placed into nomination on Monday, The New York Times reported — “because of a potential threat from Tropical Storm Isaac and concerns about a possible disruption during the roll call vote from Ron Paul supporters at the Republican National Convention next week.”

The possible change would be finalized on Friday, the report said — and while Romney’s acceptance speech would still be on the schedule for Thursday, the move “would carry significance”:

As soon as Mr. Romney officially becomes the party’s presidential nominee, he can have access to the general election money he has spent months raising. After being outspent for most of the summer by television advertising from President Obama’s re-election campaign, Mr. Romney is on the cusp of tapping into a significant financial advantage for the final two months of the race.

As for the concerns about Paul supporters?

The Republican National Committee voted Thursday to invalidate Mr. Paul’s delegates from Maine, a decision that was reached after negotiations with party officials, the Romney campaign and Mr. Paul’s aides. The Iowa Republican Party has offered to give guest passes to the convention floor for Mr. Paul’s supporters in Maine who lost their designation as delegates.

While Mr. Paul’s advisers have worked behind the scenes with the Romney campaign for months, several supporters have signaled their interest in making their admiration known for Mr. Paul next week on the convention floor. The Romney campaign has worked through most of the concerns about Mr. Paul, but officials said they were leaning toward moving up the roll call vote to Monday, a night when television networks were not planning to broadcast the convention to diminish the potential for any fireworks.

Ah yes, “making their admiration known” may indeed cause a disruption.

Read the full article over at the NYT.

UPDATE: NYT‘s Jeff Zeleny updated his report, noting that officials said Monday was the plan all along:

Romney to be formally nominated Monday. Officials say this was the plan all along, just not well known. Updated story: nyti.ms/T0W37T