Ron Paul Rips Neocons: Their ‘Greatest Fear Is For Peace to Break Out’

Ron Paul Rips Neocons: Their ‘Greatest Fear Is For Peace to Break Out’ 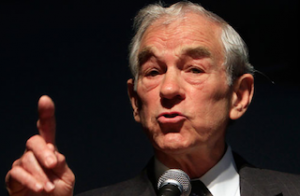 In a damning critique of what is still the Republican line on Iran, the former congressman characterized neocons as fear-mongering, trigger-happy hawks who would rather launch pre-emptive war than allow nonviolent diplomatic efforts to succeed. Their “greatest fear,” he writes, “is for peace to break out.”

Conservative pols and pundits have been working themselves into a tizzy, trying to spin recent developments in the U.S.-Iran relationship into a narrative of American folly and weakness. Never mind that those developments include the release of four political prisoners, as well as a brief altercation with the U.S. Navy, which ended — much to some conservatives’ consternation — without violence.

Conversely, Paul, the onetime Republican presidential candidate and father of current GOP hopeful (and debate no-show) Rand, praised what he described as the triumph of diplomacy thanks to both the efforts of President Barack Obama and Secretary of State John Kerry, as well as their counterparts in Tehran.

Neocons have been touting an aggressive, interventionist strategy with Iran for decades because, he writes, they have “well-paid jobs [that] are dependent on conflict, sanctions, and pre-emptive war.” This past week’s events have dealt them a “harsh blow.”

Proven wrong, however, we should not expect the neocons to apologize or even pause to reflect on their failed ideology. Instead, they will continue to call for new sanctions on any pretext. They even found a way to complain about the release of the US sailors – they should have never been confronted in the first place even if they were in Iranian waters.

And they even found a way to complain about the return of the four Iranian-Americans to their families and loved ones – the US should have never negotiated with the Iranians to coordinate the release of prisoners, they grumbled. It was a show of weakness to negotiate! Tell that to the families on both sides who can now enjoy the company of their loved ones once again!

I have often said that the neocons’ greatest fear is for peace to break out. Their well-paid jobs are dependent on conflict, sanctions, and pre-emptive war. They grow wealthy on conflict, which only drains our economy. Let’s hope that this new opening with Iran will allow many other productive Americans to grow wealthy through trade and business ties. Let’s hope many new productive jobs will be created on both sides. Peace is prosperous!