Ron Paul: The U.S. Government Knew 9/11 Was Going to Happen

Ron Paul: The U.S. Government Knew 9/11 Was Going to Happen 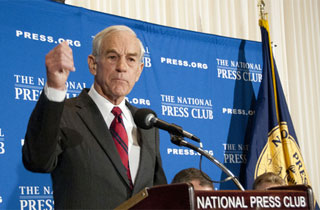 Ron Paul is not a truther (as he’s quick to tell you), but he has some ideas about 9/11 — namely, that the U.S. government may have known that terrorists would fly passenger jets into iconic American buildings, and that they hid that information from the public to this day.

Numerous reports indicate that George W. Bush received at least one memo stating that al-Qaeda was plotting an attack on American soil prior to the attacks. Paul went a step further, though. He said, “I believe that if we ever get the full truth, we’ll find out that our government had it in the records exactly what the plans were, or at least close to it,” during a Money and Markets podcast, in which he and host Charles Goyette discussed the remaining classified pages of the House and Senate’s investigation into 9/11 — pages that Paul believes hold no threat to national security.

But again, he’s not a truther, get it straight:

“It’s politically very risky to talk about [questioning the 9/11 attacks], because the left and the government defenders are really, really quick to discredit anybody who raises any question whatsoever,” said Paul. “They paint you, and they say ‘oh you question this, that means you’re a truther.’ I was always amazed, if you question and you want the truth, how they took a word like ‘truther’ and turned it into a terrible, terrible word.”

And, technically, he would be right: 9/11 truthers believe that the U.S. government actually plotted and executed the attacks in order to justify an invasion of the Middle East, while Paul is simply questioning whether the U.S. chose not to act on their intelligence and refuses to take responsibility to this day. One is a crackpot theory, and the other questions the integrity of the federal government.

And Paul drew that distinction clearly: “Does that prove the fact that our president and others actually sat down and laid the plans and did this? I don’t think it does.”