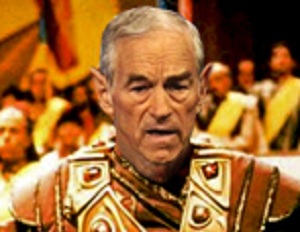 A new poll from the Des Moines Register shows Ron Paul firmly in the on-deck circle for the GOP presidential lead, should current frontrunner Newt Gingrich falter as so many Republican candidates have this cycle. Gingrich leads with 25% support among likely caucusgoers, followed by Ron Paul at 18%, just ahead of Mitt Romney at 16%. Currently in third place in New Hampshire, is Paul a photon torpedo barrage away from two early upsets?

There are many nicknames for Ron Paul’s fiercely devoted followers (not all of them complimentary), but “Ronulans” is perhaps the most fitting, from a metaphorical perspective. Like the enigmatic aliens from Star Trek, the Ronulans are a powerful bunch, able to deploy money bombs far in excess of their numbers.

Just as the Romulans do well in simulated battles like the Kobayashi Maru rescue, Ronulans consistently deliver huge results in the hypothetical world of Republican straw polls, and their candidate has been powerful in debates.

However, the Romulans are prevented from projecting that power as far into Federation space as they otherwise might by the Romulan Neutral Zone, while the Ronulans have encountered a similar barrier that keeps their candidate in a high single-digits to low double-digits neutral zone.

The Romulans’ signature technological achievement was the cloaking device, which rendered their ships invisible to enemies, while the Ronulans seem to be enshrouded in a similar cloaking field, one which renders them invisible to the media.

However, with Republican voters increasingly unwilling to cling on (see what I did there?) to any one frontrunner, and with blowback from “humane” immigration policies demonstrating that the Republican presidential race is no place for humans, could this be the dawn of the Ronulans’ day?

Paul’s got a steep hill to climb in New Hampshire, where Romney still holds a ten point lead over Gingrich (and twenty over third-place Paul), but his presence on the ground in Iowa, and the two upcoming nationally televised Iowa debates, make that seven point gap in Iowa eminently closeable. Even those twenty points in NH aren’t impossible, in a year that has seen the Republican base morph into an electoral Ricochet Rabbit.

If there is to be one more lead shift before voting begins, it looks now as if it’s only down to Ron Paul and Jon Huntsman, and if that does occur, the next frontrunner will benefit from the fact that there’s really no time for the blistering rays of media frontrunner scrutiny to wither them before voting begins. In that narrow fashion, the news media’s complete ignorance of Ron Paul actually becomes an advantage.

The rub, of course, is that even if Ron Paul manages to win Iowa, the media still won’t take him seriously, and if he manages an upset silver (or gold?) in New Hampshire, maybe they will. More than likely, though, bombshell wins by Ron Paul in these early states will simply reinforce the narrative that the GOP presidential field is a mess, and they’re headed for a brokered convention. Honestly, if Ron Paul was actually elected president, I wonder if the media would even show up to cover his inauguration. I imagine the chyron at his swearing-in would read, “Is Ron Paul The Real Deal?”

Note: There are several Star Trek-related details in this article that aren’t quite right, both for my own convenience, and to provide our readers with a reliable Dork Detector. See who spots them in the comments section, and offer them some helpful decorative tips for their mom’s basements.