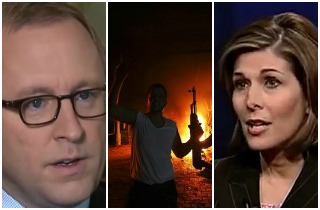 In May of 2013, President Barack Obama’s supporters were put on the defensive when ABC News exposed new details about the White House’s response to the Benghazi attack. The report suggested that National Security Advisor Susan Rice knowingly misled the country about the impetus for that 2012 assault on an American consulate when she appeared on five Sunday talk shows.

The press was scandalized. Buzzfeed’s Ben Smith conceded that the White House looked “terrible.” The Daily Beast columnist Michael Tomasky said that Republicans might pursue the revelation as a potential “impeachment issue,” and implied that they may be justified in doing so. “Heads will roll,” wrote BBC editor Mark Mardell. “This is the first hard evidence that the state department did ask for changes to the CIA’s original assessment.”

It was not long before the once clear evidence that the White House had misled the country in order to achieve a political end in the autumn of a presidential election year became muddied. It was soon revealed that Karl and Attkisson merely saw versions of those emails reproduced from their source’s memory. That source was likely linked to a Republican officeholder who had access to the original emails.

CNN’s Jake Tapper discovered through his reporting that the context of the email chain in question had been lost in translation. Karl and Attkisson’s original reporting, which implied that Rhodes had sought to put his finger on the scales to shape the narrative of events on the ground in Benghazi, was incorrect. In fact, the emails showed that Rhodes was merely displaying deference to the competing claims of both the CIA and the State Department regarding how events in Libya unfolded on September 11, 2012.

The White House pounced. “There is no there there,” the President of the United States said in a press conference on May 13 in which he insisted the investigation into the Benghazi attacks had become a “political circus.”

“The whole issue of talking point, frankly, throughout this process, has been a sideshow,” Obama continued.

Calling the emails “doctored” by Republicans (a claim for which he was awarded three Pinocchios by The Washington Post’s Glenn Kessler), White House strategy and communications advisor Dan Pfeiffer insisted that Rice was owed an apology. Media Matters for America insisted that Karl had simply “invented” his claims about the email chain from whole cloth.

“If your source lied to you, they are not actually a source,” MSNBC host Rachel Maddow declared. “They are a con artist, and you are their victim.” She urged Karl and Attkisson to burn their confidential informant in order to salvage their reputations as journalists.

But Karl and Attkisson stood by their original reporting. “I regret that one email was quoted incorrectly and I regret that it’s become a distraction from the story, which still entirely stands,” Karl wrote. An internal CBS memo obtained by Mediaite showed that Attkisson had included in her filing on the original email chain a note at the bottom of the report indicating that the emails were reproduced “from handwritten notes, and the attorney source explained why they were not direct quotes and could not be represented as such.” That caveat was dropped from the report when it was published online.

Karl and Attkisson did not even have to wait a full year before they were vindicated. Emails obtained by the conservative government watchdog group Judicial Watch revealed on Tuesday that Rhodes had, in fact, put his finger on the scales just days before Rice blamed a YouTube video for the attack on the Benghazi consulate. Sorting out competing interagency claims himself, Rhodes urged Rice to assert that “these protests are rooted in an Internet video, and not a broader failure of policy.”

As The Daily Beast’s Eli Lake reports, when Rhodes wrote those words, the CIA deputy U.S. chief of mission in Libya, the CIA station chief, and the Tunisian President had all insisted that an anti-Islamic video was not a factor leading to the attack in Benghazi. “[T]he State Department was hiding this e-mail and other documents covered by the Committee’s August 2013 subpoena,” Frederick Hill, the deputy staff director of the House Oversight Committee which had obtained these damning emails two weeks ago, told Lake.

Of course, some in the press will stand by the White House. “Is it supposed to be scandalous that the White House spins things?” Politico Magazine Deputy Editor Blake Hounshell asked before admitting he had not actually read the allegations in the reports detailing the newly released emails. Upon reading them, he assiduously defended the administration. Pointing to a New York Times report from December of last year, Hounshell insisted that the anti-Islamic video “WAS a factor” resulting in the deaths of four Americans.

His faith is apparently unshaken by the claim of former U.S. Deputy Chief of Mission in Libya Gregory Hicks who testified under oath that the video was a “non-event” in Libya and that he was “embarrassed” and “stunned” by Rice’s claims on those Sunday programs. Nor is Hounshell unnerved by the release of declassified transcripts of conversations between Pentagon officials and members of the president’s Cabinet on the night of the assault in which they stress that the events unfolding in Libya were the result of a premeditated “terrorist attack.” Further, Hounshell was apparently unconcerned with the fact that the Times report he relies on oddly omitted details which the paper had previously reported about members of Ansar al-Shariah, Al Qaeda in the Islamic Maghreb, and the Muhammad Jamal network participating in the coordinated assault on the consulate and the ensuing mortar attack on a local CIA annex.

For some, the conclusion that the administration was not in the wrong when they claimed the attack in Libya was a spontaneous event is one that cannot be shaken. This will not be the case for many, however, who see the latest email disclosures for the revelations they are. Chief among them are Karl and Attkisson who, it seems, were right all along.

Correction: an earlier version of this post named Rice as the former National Security Advisor. That is her current title.