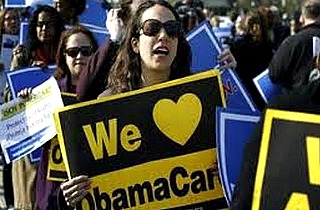 The Affordable Care Act’s Hindenburg-like debut has been characterized a series of spectacular failures, the latest being an attempt by President Barack Obama’s political arm, Organizing for America, to furnish their followers with effective pro-ACA talking points. This army of true believers was instructed to bombard their unsuspecting kin with counterpoints to deflect the unceasing stream of bad ACA news screaming at them from the television set.

It was a noble effort, albeit one that was mocked furiously on the right. But it wasn’t conservatives that scuttled this operation. It was the mortifying inability of the ACA’s infrastructure to back up any of the claims ACA supporters were preparing to make.

When OFA sent an email to their followers with a number of pro-ACA talking points, the law’s supporters in the media took their cue. The most comprehensive expansion on the theme of how best to arm ACA supporters with information that would allow them to “win” arguments with their relatives about the ACA came from the Huffington Post.

“Here at HuffPost we believe in news you can use,” wrote reporters Shadee Ashtari and Ryan Grim. “Because what good is having a political opinion if you can’t prove it’s the right one in front of your extended family on Thanksgiving?”

They proceeded to detail how stalwart liberals can dodge their anti-Obamacare relative’s “I-told-ya-so” jabs and counter with a variety of salient counterpoints like “corporate greed” and “you prefer corporate monopolies?”

Huffpost was joined by other left-leaning media outlets who anticipated a nationwide holiday Gotterdammerung that would finally settle the legitimacy of the ACA. But these wide-eyed health care reform advocates would be undone, not by their own efforts, but by that which they had no control over – the abject failure of the federal insurance exchange site to function.

First, the news broke that HealthCAre.Gov holiday call center operators would not be working on Thanksgiving. Combined with the website’s inoperability, this put a damper on OFA’s suggestion to supporters that hey walk their relatives through the signup process while they were too inebriated to fully appreciate the consequences of their actions.

Then, on Wednesday morning, the New York Times reported that the fragile website would simply be unable to handle a burst of interest in the ACA exchanges over the holiday. The White House urged “allies to hold back enrollment efforts.”

Just as events were looking most grim, enter Huffington Post reporters Ashtari and Nick Wing to repair the damage done to the credibility of millions. Who needs those annoying political arguments over the holidays anyway, they asked “Here’s how you can stop them.”

“We know the president wants us to discuss healthcare, but it might ruin the turkey in this family,” they observe. “Is everyone aware there’s a baby panda trying to walk right now?”

What a perfect way to bookend this latest debacle.

Those ACA supporters still capable of embarrassment should be absolutely beside themselves over this latest fiasco in a Macy’s Day Parade of fiascos. They were being used by the administration and they were perfectly willing to serve as talking props for the cause, even at the expense of familial comity. And now they discover that they cannot even be used effectively due entirely to the incompetence of the federal government. How positively humiliating.