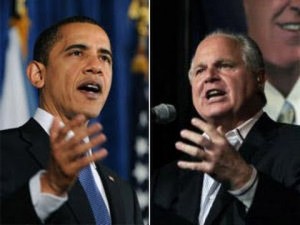 The news of the day of course is that the Supreme Court, in a 5-4 vote, upheld President Barack Obama‘s health care initiative — with much of the focus being on the individual mandate, which critics believe in unconstitutional. By contrast, the Court ruled otherwise, keeping it intact as a tax. Displeased, to say the least, Rush Limbaugh cited Obama’s previous remarks, in which he insisted it’s not a tax, and deemed the Affordable Care Act “the largest tax increase in the history of the world.”

Limbaugh then went on to note a statement Chief Justice John Roberts made in the opinion (a statement that’s also been making the rounds on Twitter). “It is not our job to protect the people from the consequences of their political choices,” Roberts said.

“Well, what about when we are deceived?” Limbaugh asked. He went on:

The court upheld a law that was not what we were told it would be. What has been upheld here is fraud, and the Internal Revenue Service has just become Barack Obama’s domestic army. That is what we face now. We were deceived. ObamaCare was a lie. It was a stealth tax on all Americans, and nobody knew it until today. Not officially. Obama told George Stephanopoulos it wasn’t a tax. And Stephanopoulos was trouble-making for trying to suggest otherwise.

Limbaugh recalled Obama saying couples making less than $250,000 a year would not see any tax increases. “That’s out the window,” he said. “It was a lie. We were all deceived.”