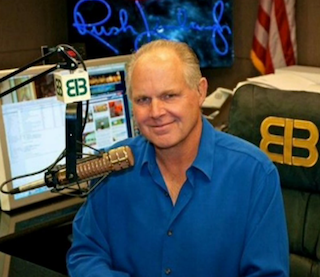 In 2011, the phrase “no, I’m not on Twitter” has become the “I don’t own a TV” or “I only listen to records” of our time: a way for self-styled nonconformists and iconoclasts to set themselves apart from the low sound quality-listening, reality show-watching, gibberish-retweeting sheep that surround them. And, as such, the response to those Twitter abstainers has become like that which their luddite forefathers received: an indignant “What? Are you SERIOUS?!?!” which only forces the hold-outs to become even more defensive.

Today on his radio show, Rush Limbaugh was asked why he had no Twitter account, a question loaded with implied accusations of irrelevance. The caller who asked him, perhaps sensing this, coated the question with compliments; telling Limbaugh that he was “a man who can say more in one sentence than others say in a lifetime”. Why, he wondered, would a man such as this withhold his gift from the Twitterverse? Properly buttered up by the hyperbole, Limbaugh tried to answer as “diplomatically” as he could and, to his credit, he almost succeeded.

Limbaugh, said that he truly wasn’t “trying to insult anybody” but he felt Twitter was for people with a “herd” mentality and that he was too much of a nonconformist. He told the caller that, if everyone was doing something, someone had to be wrong.

This is where Limbaugh’s attempted argument falls apart for me. It sounds too much like the “I don’t like anything that everyone else does” credo that permeates hipster culture now and I myself briefly adopted during my high school years.* If everyone liked something, it had to be lame, right?

Fortunately, though, Limbaugh gives another reason that works better:

“Besides, why tweet what I think and cannibalize my own radio show? I want you to come here to find out what I think. Not go to Tweeter places and stuff like that.”

What’s most interesting is that Limbaugh’s “diplomacy” here seems to be in part because he realizes he’s holed up in a bunker, facing a losing war. He admits that his show will begin using Twitter (although he quickly rationalizes that they will only be linking to monologues so that it’s actually “worth something,” gosh darn it!). He may have held out this long but you can tell that, for this warrior in a war against what seemed like frivolous youth culture just a few years ago, the dreaded Fail Whale of surrender is approaching.

*I still hold to my belief that the Lord of the Rings movies were terrible for a wealth of reasons but I will admit that some part of my seething hatred for them at the time was caused by my bewilderment at seeing my entire school suddenly start speaking f**king Elvish.