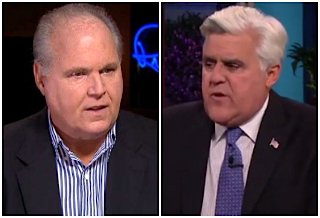 Jay Leno has become a bit of hero to conservatives in recent months for his relentless jokes about President Obama and the Affordable Care Act. But one conservative who isn’t jumping on the Leno bandwagon is Rush Limbaugh.

After playing a clip of Leno questioning whether Ronald Reagan would be conservative enough for the tea party today, Limbaugh backed up Cruz by claiming Reagan wasn’t as fond of comprise as Chris Matthews’ recent book Tip and the Gipper

would have you think. “Cruz is exactly right,” he said. “Reagan was the Tea Party of his day! Leno couldn’t possibly know that.”

The radio host proceeded to go off on a rant against “stupidity” that left the listener with the implication that he did not think highly of the Tonight Show host’s intelligence. “There’s just a lot of stupid, and not just voters, but I’m talking about journalists,” he said. “You know, we assume that they’re curious and know things because it’s their job and they’re close to the facts. They’re stupid! They’re not curious. They are ignorant of things. And they’re ideologues so they’re ignorant.”

“As far as Leno’s concerned, Cruz is there just to be mocked and made fun of, and maybe acquire an audience, but as far as Leno actually listening to what Cruz has to say?” Limbaugh asked. He imagined that while Cruz was talking, Leno was thinking, “‘Yeah, you idiot, talk about what you think. You extremist, you racist bigot. Yeah, go ahead.'”

Then, once again, Limbaugh began to backtrack:

“I don’t want to indict Leno. He may not be saying that. I take that back. See, I like Leno. I mean, compared to the Letterman and the rest of that crew at night, it’s no contest. But the one thing I don’t know how to deal with is stupidity. I mean, how do you deal with stupidity? How do you inform stupidity? Ignorance is a different thing. You can open the mind of the ignorant. You can open their eyes and have lights go on, but the stupid are another. The closed-minded, stupid are another thing.”