Limbaugh: So Many Versions Of Bin Laden Raid Means Obama Is Hiding Something 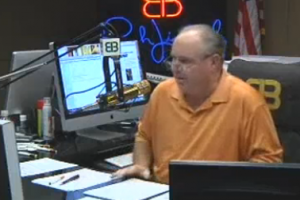 Rush Limbaugh started off humorously enough before using President Obama‘s success in killing Osama bin Laden as a crucial part of Rush’s large and strange mosaic establishing Obama as someone who “has to hide who he is and what he’s doing.” Far from the most transparent President ever, Rush believes Obama is perpetually pursuing a secret agenda. It makes you wonder is now really the time Rush expects anyone to hop aboard this crazy train?

Rush suggested, “if your spouse has three different versions of a night out with the girls, she’s hiding something, right?” From there, Rush said the Obama administration is so determined not to say Obama ordered an assassination that they keep coming up with “contorted versions of self-defense.” As it becomes less clear whether there actually was a “firefight” or whether Bin Laden was completely defenseless, Rush is accurate to recognize it is a little troublesome why all administration officials can’t get the story straight and stick to it. However, for Rush to use this miscommunication as a launching pad for suggesting Obama truly is a member of the radical Left is just bizarre.

Rush is right that it’s worth worrying if Obama secretly believes most of the things on that list. However, Obama ordering the killing of Bin Laden and being hesitant to say it, not only doesn’t belong in the same category, but should be cheered rather than ridiculed by Rush. Who cares what Obama says to humor a naive base, serious Republicans should be more concerned (and pleased) with how Obama acts, and the fact is Obama has shown the terrorists no mercy.

Rush (and any other conservative critics of Obama’s handling of Bin Laden) blew a huge opportunity here to establish some credibility with moderates moving forward. Most Americans will continue to be appreciative of Obama for ordering the mission that killed Bin Laden, and no matter how Obama did it or what he says about it, it doesn’t change the most important and satisfying fact: Bin Laden is dead. Now if you want to debate whether the America that Obama has undisputedly kept safe is turning into a bankrupt country, full of incentive-killing socialist programs, well on those issues Rush, we are all ears.