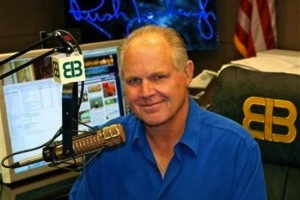 Rush Limbaugh devoted a segment of his radio show to discussing hormonal birth control (which extends to things like birth control pills and patches, but not forms of birth control like IUDs, diaphragms, sponges and involuntarily perpetual virginity). Because, why shouldn’t he? Birth control is a hotly debated socio-political issue inspiring lots of arguing. Perfect talk radio fodder.

He kicked things off by citing an article in The Wall Street Journal this week – “titled The Tricky Chemistry of Attraction” – which suggests that, according to “new studies,” women who use hormonal contraceptives may run the risk of disrupting “chemical signals, affecting their attractiveness to men and women’s own preferences for romantic partners.”

Being among the ovary’d population myself, I generally try to keep up with research about things that could potentially impact ladyfolk, so I know that these “new studies” aren’t all that new, really. In fact, a cursory Google search reveals a Reuters post about a possible correlation between birth control and the “sexiness of a man’s scent” written in August of 2008. Plus, this is the kind of story ladyblogs write about at least once a year. I know because I receive approximately seventeen email forwards, 78 Facebook updates and 237,900 Tweets about it every time .

And, each time I’ve read about such a study, I’m inevitably told that taking hormonal birth control will possibly impede my ability to make a good decision about people of the opposite sex with which to maintain the human population. The WSJ article is, of course, no different in this aspect:

The type of man a woman is drawn to is known to change during her monthly cycle—when a woman is fertile, for instance, she might look for a man with more masculine features. Taking the pill or another type of hormonal contraceptive upends this natural dynamic, making less-masculine men seem more attractive, according to a small but growing body of evidence. The findings have led researchers to wonder about the implications for partner choice, relationship quality and even the health of the children produced by these partnerships.

Guys. This is really worrisome. I could accidentally end up procreating with a metrosexual in skinny jeans whose immune system, combined with mine, will create woefully inferior mutant babies, leaving me surrounded by piles and piles of snot-filled tissues and half-empty bottles of Axe body spray. And I’m going to be too busy being a working mother to clean any of that up. I will have failed the species spectacularly, and all because I wanted to regulate my menstrual cycle.

Now, it’s not that Limbaugh is advocating that women (or their – male – sexual partners) run out and immediately dump all their hormonal birth control into the nearest body of water, perhaps creating a legion of morbidly obese hermaphrodite fish with a taste for human flesh. He’s simply saying that, hey. Maybe this is why marriages break up. Maybe if women stopped taking hormonal forms of contraception, marriages would last longer, and guys wouldn’t be such wusses and women would stop transforming into militant feminazis with unfortunate taste in footwear.

“Now this, to me,” said Limbaugh of the studies’ findings, “explains most marriages in Washington.” (Pause for laughter.) Limbaugh later clarifies that this has “nothing to do with sexual orientation” (i.e. that total pansy you now find yourself inexplicably attracted to, ladies, isn’t necessarily gay), but that these findings may explain why, say, divorce is on the rise. And that sounds like a valid thing to worry over, right? If I’m taking a substance that’s going to alter my body in significant ways and which may also run the risk of harming my emotional well-being or the physical well-being of my offspring, I want to know about it.

The trouble with the studies Limbaugh and ladyblog commenters so love to discuss, however, is that, not only is there is still much debate over whether pheromones actually have an impact on human behavior, there is a difference between finding that your opinions or hunches have a basis in scientific fact, and skewing information so that it fits your agenda. The WSJ article – while splashy and sensational – has a lot of holes where Limbaugh’s thesis is concerned. A study performed on lemurs but not on humans sounds good and extremely interesting, but it does not give us any definitive information about, in this case, whether women taking Depo-Prevara experience some sort of skewed “mating preference.” Besides, there are just so many variables at play here – sex drive, cultural preferences, dating history, age, health, etc. – that it’s ludicrous to turn a study on T-shirt sniffing into a definitive statement about what makes men and women want to make a huge mistake together. It’s hype, pure and simple, and it’s hype that fits an agenda.

How we discuss birth control can and does influence how we discuss issues like abortion and equal rights. And these discussions warrant arguments – for either side, any side – firmly bolstered by proven, well-researched facts, not emotions, not bunk science from glossy magazines, not urban legends masquerading as anecdotal evidence. Limbaugh does a disservice to discussions on contraception (and sex, and woman) by using pop science to provide a framework for ideas that could very well be construed as being sexist and, yup, even homophobic. If the goal was to make a joke at the expense of Washington couples, then fine. But if the purpose of this segment was to have a serious discussion about men, women, contraception and chemistry then… well. I think Limbaugh is intelligent enough to know the argument here are thin, at best.

In any case. Here’s the segment, via The Rush Limbaugh Show. Give it a listen and weigh in. I’ll be over here finding myself attracted to nice guys instead of burly, bombastic radio talk show hosts: