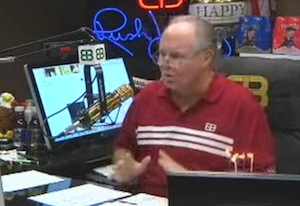 Something about this debt deal smells fishy to Rush Limbaugh, especially given the fact that many media headlines suggest the deal is a “big win for the Tea Party.” Rush, perhaps smartly, concludes that if this plan was truly so great for the Tea Party then why would President Obama sign it, and more importantly, why would members of the media continually try to beat everyone over the head with the fact that the Tea Party is the real winner here?

Instead Rush cautions his listeners, “I don’t know that the budget battle has been won” and “I would love to support it, but there are things about it that give me pause.” Most specifically, Rush worries that the debt deal assumes the Bush tax cuts expire next year, which would result in an enormous tax increase. And even if by some chance the Bush tax cuts do get extended again, the current deal would sanction replacing such a cut in anticipated government revenues with additional tax increases elsewhere in the system.

Returning to the media angle, Rush theorizes the real reason the media is calling this a Tea Party victory is simply to get House Republicans to vote for this bill. And since “the media knows that people who live and work in Washington crave support and praise from the media,” Rush seems disappointed that the strategy might work. Though perhaps a surprise to some, Rush wasn’t furiously opposed to the overall deal. Yet Rush’s hesitation to be a party pooper may have been tied to the fact that today he was focused on a personal celebration: his 23rd anniversary broadcasting on radio.