Limbaugh: ‘We Need To Open The Program Today By Congratulating President Obama’ 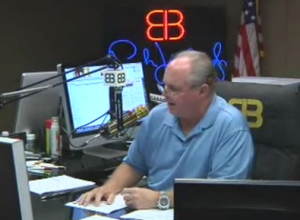 Amidst all the revelry on Twitter last night, tons of people were voicing their concerns that the death of Osama bin Laden would inevitably be twisted for political gain, that some person would force this huge moment straight into the political Spin Machine. Let it be known; Rush Limbaugh is not that person. Limbaugh opened his show today with huge praise for his President, his military, and his country. That’s right, folks. America can still get along. (UPDATE at bottom)

While Limbaugh pointed out that President Obama was successful because he continued President Bush’s, a cynic might have expected the host to harp on this point. That’s not at all what happened.

“President Obama has continued the Bush policies of keeping a military presence in the Middle East. He did not scrub the mission to get Bin Laden. In fact, it may be that President Obama single-handedly came up with the technique in order to pull this off. You see, the military wanted to go in there and bomb as they always do. They wanted to drop missiles and drop bombs and a number of totally destructive techniques here. But President Obama, perhaps the only qualified member in the room to deal with this, insisted on the Special Forces. No one else thought of that. President Obama. Not a single intelligence adviser, not a single national security adviser, not a single military adviser came up with the idea of using SEAL Team 6 or any Special Forces.”

While he was glad Obama didn’t listen to his military advisers, Limbaugh was just as effusive in his praise for the brave men and women who protect our nation and pulled this mission off. “Last night,” he said. “I was as proud of the US military as I’ve been in I don’t know how long.”

You know how people always talk about getting back to the way we were on September 12th? It may have just happened.

Check out the opening of Limbaugh’s show below:

UPDATE: Later on in Limbaugh’s show, he mockingly read from a post on The Hill and mentioned this post here as well as one on The Huffington Post. Many have taken this to mean that he was being sarcastic in the entirety of his comments this morning. While he clearly was giving the media a little joshing in regards to the “only qualified member in the room” bit, the entire opening of the show was as about as nice as Limbaugh’s ever going to get on Obama. Yes, he didn’t spend the entire show singing the President’s praises, but he also didn’t call him “Pharaoh” or mock the First Lady’s weight. You have to remember, in the world of talk radio, everything’s relative.

Video of the later comments below: