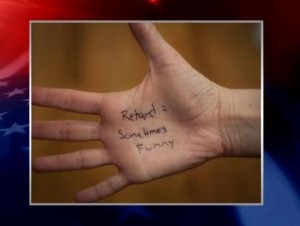 Despite her complete misunderstanding of the First Amendment, you almost have to admire the mavericicity of Sarah Palin‘s Dr. Laura Schlessinger defense, especially in light of the fact that Schlessinger trashed Palin on her blog during the 2008 campaign. That’s some remarkable consistency, isn’t it?

Things get a bit confusing, however, when you throw Palin’s reaction to Rahm Emanuel’s use (in private) of the word “retard” earlier this year.

Palin has thrown her support behind Dr. Laura, who quit her radio show following her uncensored use of the n-word on a broadcast last week. While Palin supporters might point to this as courageous adherence to a principle, even an imaginary one, her earlier demand for Rahm Emanuel’s firing belies that.

Her crusade against the so-called Ground Zero Mosque also indicates a less-than-steely adherence to the First Amendment, unless she’s simply separating the religulous clause from the “right of every citizen to a radio show” clause. Taken together, her acceptance of Dr. Laura’s n-word rant, lack of same for Rahm’s use of “retard,” and disregard for the religious freedom of Muslims could be interpreted as an inability to get worked up over anything she can’t see from her front porch.

The real answer, though, is probably much simpler. After Palin called for Rahm Emanuel’s head, she gave a total pass to Rush Limbaugh for the same offense. In forgiving Limbaugh, and defending Dr. Laura, Palin is just supporting “the team.”

While it was jarring to see Palin retract her mama grizzly claws and choose Limbaugh over special-needs children everywhere, she was arguably put on the spot there. In the case of Dr. Laura, Palin’s ride to the rescue was entirely voluntary, and superfluous.

While it is unclear what Palin hoped to gain by this, it’s a safe bet that she didn’t see herself having much to lose. Her supporters’ bulletproof loyalty notwithstanding, however, a double standard like this doesn’t look good for conservatives. One of them ought to come out and refudiate Palin’s unwise defense of Dr. Laura.