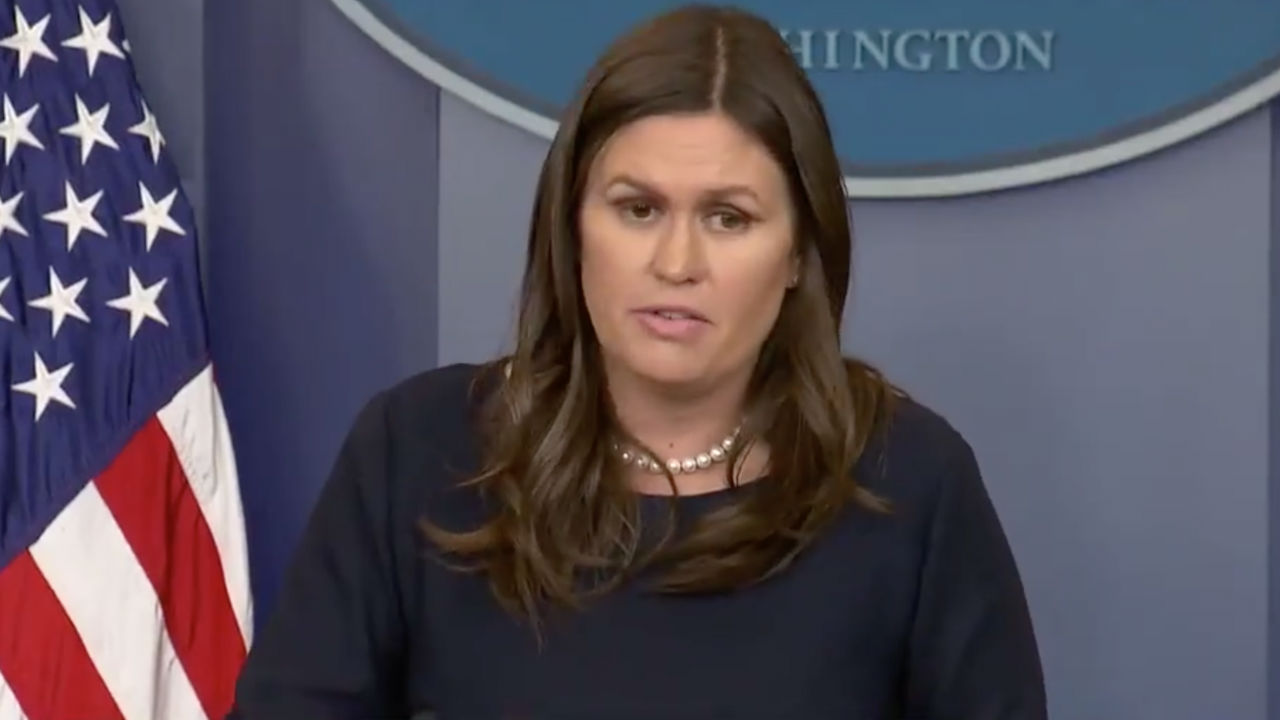 The White House revoked Acosta’s press credentials on Wednesday, hours after his explosive clash with Donald Trump in which he hit the president with numerous questions. Sanders stood by the move with a tweeted video that, according to her, shows Acosta’s “inappropriate behavior” after a White House aide tried to take his microphone away.

Sanders’ reasoning echoes many in conservative media who are convinced Acosta assaulted the woman. However, many other journalists have pushed back on that claim, arguing the video does not show the reporter using any excessive force.

Back to the video: a number of journalists have noticed that it seems deceptively-edited to make Acosta’s actions look more aggressive than they really were:

1) Took @PressSec Sarah Sanders’ video of briefing
2) Tinted red and made transparent over CSPAN video
3) Red motion is when they doctored video speed
4) Sped up to make Jim Acosta’s motion look like a chop
5) I’ve edited video for 15+ years
6) The White House doctored it pic.twitter.com/q6arkYSx0V

Okay, this smear by @PressSec was so awful and I like nerding out on Final Cut so much that I had go full Zapruder here. Look at the “placing his hands on a young woman” she’s referring to which is clearly the exact opposite of what she claims. cc: @Acosta pic.twitter.com/2HvJ3CgmlW

Further analysis: video is absolutely doctored. You can see the edit when the clips are side by side and slowed down to quarter speed. See for yourself: pic.twitter.com/4ZZrzhislg

Yes. I’ve watched the actual footage and the one from the White House together. It seems the zoomed in portion speeds up. The guy in the background moves faster leaning back than in the unzoomed in video.

You posted a doctored video made by a conspiracy theorist. The only credentials that should be stripped are yours. You’re a disgrace.

This video is doctored. It’s slowed down and then sped up at the moment Acosta’s hand comes down to make it look like he’s doing a karate chop or something. This is shameful propaganda. It’s Orwellian. https://t.co/in8m3iHn18

As CNN’s Brian Stelter and others have pointed out, conspirational outlets like Infowars and Twitter accounts affiliated with it spread the video before it got picked up by Sanders.

Question for @PressSec: Where’d you obtain the distorted @Acosta video you posted? InfoWars personality @PrisonPlanet posted the same video two hours before you did. Surely you don’t trust InfoWars…?

Trump’s press secretary, who frequently calls accurate but critical reporting “fake,” is sharing doctored video produced by InfoWars, a lunatic conspiracy theory outlet who has falsely claimed that the Sandy Hook massacre was faked & that John Kerry shot a hurricane with a laser

The White House Press Secretary tweeted a doctored Infowars video, solidifying her position as the most dishonest Press Secretary in history. That is something. https://t.co/rQgJnGfQq1

You can see Jim Acosta did not “grab” this woman. He refused to let her take the mic, & was so polite as to say “excuse me ma’am,” when he pulled away from her attempted mic grab. The White House is pushing doctored footage from InfoWars to blatantly lie & slander Acosta. Insane. https://t.co/9MVgV8MFxb