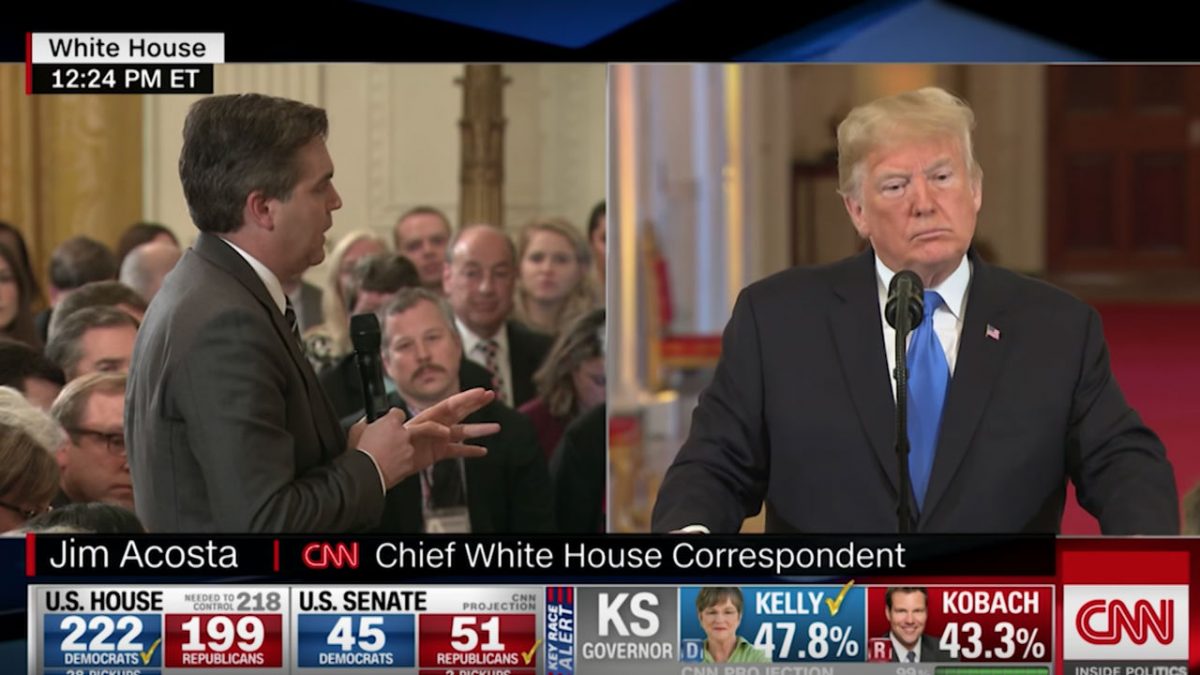 Press Secretary Sarah Sanders accused Acosta of crossing a line in “placing his hands on a young woman just trying to do her job as a White House intern,” referring to the intern who tried to take the mic from Acosta earlier.

Reporters came to Acosta’s defense and criticized the White House, while reporters in the room earlier said Sanders is not being accurate about what happened:

If this is a decision by the White House because it doesn't like the coverage, it's the first time I can remember this happening to any reporter since I started covering the White House more than 22 years ago. Very bad sign. https://t.co/VNPDua0dZn

this is garbage. and everyone saw what happened https://t.co/wqBad9SRKz

Even though Jim is a Redskins fan, this is petty and unfair treatment by an administration that has sought to make him a target of ire https://t.co/MGHTRzyhrA

This is chilling and outrageous. https://t.co/A7YhSuCe65

This is wrong and deeply concerning. https://t.co/8fAE2eC9Uc

The White House says it’s suspending @Acosta’s credential because he was “placing his hands on a young woman” during a heated moment at today’s press conference. Watch the video for yourself — that didn’t happen. https://t.co/wrvcNNB9AD

Please watch this. @Acosta did not grab or put his hands on this young lady. https://t.co/u3BaluYL3H

This is shameful & bad faith.

Plenty to criticize Acosta about, but he did not "place his hands" on the intern. It's ridiculous for anyone to suggest he did. And after Trump joked about Gianforte bodyslamming Ben Jacobs the White House can't bust out the fainting couch now. https://t.co/1rFOw9CCiz

The White House has indefinitely revoked my colleague @Acosta’s WH credentials, accusing him of “placing his hands” on the WH intern who grabbed & tried to take the mic away from him.
Jim did no such thing. He simply held onto the mic & kept pressing the President to answer a Q pic.twitter.com/otbW3UzEse

I was seated next to ⁦@Acosta⁩ at today’s press conference and did not witness him “placing his hands” on the young intern, as the White House alleges. He held on to the microphone as she reached for it. The ⁦@Reuters⁩ pictures below depict what happened accurately. pic.twitter.com/nO68Hf4eQM

It's extremely unusual for a WH to pull a fulltime reporter's credentials. Also unusual for a reporter to refuse to give up the mic after asking several questions.