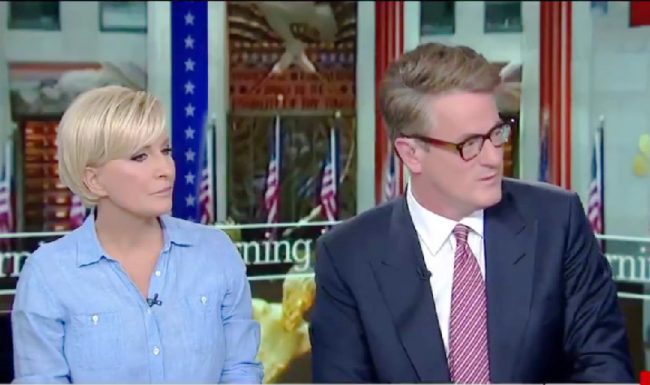 This morning’s broadcast of Morning Joe became must-watch TV when it was announced last night that hosts and power couple Joe Scarborough and Mika Brzezinski were delaying their vacation and would address the recent Twitter attacks by President Donald Trump. Their appearance was preceded by a joint op-ed in the Washington Post in which they said the president is “not well,” among other things.

During a hotly anticipated MJ appearance this morning, they dished a whole bunch of dirt while Mika lamented that the president is “so easily played by a cable news host.” One utterance during their lengthy discussion on Trump’s tweets that perked my ears up, however, was when Scarborough claimed that the president is “not the guy we knew two years ago.” In his opinion, Trump used to be “in on the joke,” but now running for president changed him for the worse.

WATCH: “The guy that’s in the White House now is not the guy we knew 2 years ago.” @JoeNBC says of Trump on @Morning_Joe pic.twitter.com/Rwnzs3J7WM

So this unhinged guy  — who now launches sexist attacks against women who cross his path —  is suddenly different than the one who bragged about grabbing ’em by the pussy? He’s not the same guy as the one who continuously fat-shamed a Miss Universe, Alicia Machado? Or the man who reportedly walked in on teenage beauty pageant contestants because he felt he was entitled to do so? Or the guy who called women “fat pigs” and “disgusting”? Or the one who was constantly flouting his sexual exploits while slamming women during years of interviews with Howard Stern? Huh.

But, more so, is Scarborough actually trying to get us to believe that Trump wasn’t really prone to conspiracy mongering and embracing reactionary hateful rhetoric until he became a presidential frontrunner? As if Trump didn’t try to get into politics a few years ago by pushing birtherism to appeal to racist voters who absolutely hated President Obama. Or that we can just dismiss then-private citizen Trump’s call for the execution of the since-exonerated Central Park Five. (And his continued insistence that they were guilty even after being proven innocent.)

The fact is, the president HAS shown a long history of racially insensitive, sexist and just plain hateful behavior. This isn’t some newfangled thing that all of a sudden turned up. So why is Joe attempting to sell us this bill of goods?

Yes. Joe and Mika had a symbiotic and friendly relationship with “The Donald” going back more than a decade. So when Trump tossed his hat in the overcrowded Republican presidential ring two years ago, he found an open platform on Morning Joe. Brzezinski and Scarborough were more than willing participants to present the “Trump Show”  back then, providing him lengthy phone-in interviews where he could gain free airtime and separate himself from the other GOP candidates, who were all struggling to get media attention.

As the primary marched on and Trump’s campaign gained momentum, the symbiotic relationship between Morning Joe and Trump drew notice. Especially after Trump called the couple “supporters” and Joe and Mika held a softball-laden primetime town hall event with the then-candidate.

This might be why Joe now wants us to believe Trump has only recently changed. His program’s tacit advocacy for Donald Trump early on needs to be explained, especially in light of their explicit anti-Trump tone in recent months. The only way to credibly do that is to act like this is a whole new Trump. The chase for and achievement of the highest office in the land is the thing that did it to him. That his bigoted rhetoric, childish petulance, raging misogyny and all-around disgusting behavior wasn’t apparent before.